The Liechtenstein-based coatings specialist takes a substantial stake in the Californian source maker and agrees joint development plan for projection laser technology. At the same time, Novalux raises US$21.7million in 'B' funding.

Unaxis Optics, which develops coatings technologies for optical components primarily used in projection displays, has acquired a stake in Novalux Inc., which specializes in the development of semiconductor laser technology. Unaxis, based in Liechtenstein and which is a division of Swiss technology company Unaxis Holding, described its shareholding in California-based Novalux as "substantial and strategic".

At the same time, Novalux announced that it had closed a Series B financing for up to $21.7 million. Unaxis Optics led the financing round. Previous investors, including Crescendo Ventures (Palo Alto, Calif.), Morgan Stanley Venture Partners (New York), Dynafund Ventures (Torrance, Calif.) and Tredegar Corp. (Richmond, Va.), also participated. Novalux will use the capital to complete NECSEL product development and enhance its production infrastructure. 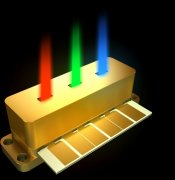 An agreement was also signed between the partners for the expansion of applications for Novalux's solid state laser technology under its NECSEL brand (Novalux Extended Cavity Surface Emitting Laser).

According to the agreement, Novalux will license its RGB laser reference design and will supply Unaxis with NECSEL semiconductor chips. Unaxis will then mass produce and distribute RGB laser modules into the projection display supply chain.

Features provided by laser based systems powered by NECSEL lasers include images with truer colors than those from "conventional" lamp systems, greater brilliancy and higher reliability. The new systems are also said to cut waiting times when projectors are started up.

Novalux laser sources can reduce the number of required components and thus costs of the light source and other optical components. This could allow volume production of top-performance optical devices at more competitive prices, Unaxis Optics stated.

Novalux is a relatively recent start up company (1998) with which Unaxis has had no previous business arrangement. However, both companies have been operating in the same market sector: projection displays.

One of the partners' key objectives will be to take on the traditional market for high voltage, high temperature lamps. Applications of the proposed Novalux/Unaxis developments are in large displays and in micro projectors such as high definition TVs. There could also be applications in cell phones and gaming consoles, mini projectors, head up displays and in projecting driver information on to vehicle windscreens.

"We are delighted to welcome Unaxis as a key shareholder and partner," said Novalux Chairman and CEO Jean-Michel Pelaprat. "Our joint agreement will allow NECSEL laser technology to permeate projection display applications via RPTVs and front projectors, and will open new markets such as pico-projection."

"The laser technology from Novalux is an ideal addition to our own technologies and products," said Thomas Limberger, CEO of Unaxis. "This development is an innovation that should reshuffle the market for front and rear projection displays and represent the future direction of projections systems. It opens up new markets such as pico-projection and 3D applications."

"The partnership with Novalux makes sense for Unaxis since the technology is complementary to our product portfolio and can be applied across the range of micro display and scanning devices. Our customers will now have access to Novalux laser modules and light engines designed and built by Unaxis."

"Our NECSEL technology is ideal for many current and future projection display applications, " said Jean-Michel Pelaprat, Novalux Chairman and CEO.

"The new arrangement will provide consumers with a lower cost, longer lifetime solution than other light sources, along with an unmatched viewing experience. This partnership positions both companies to launch RGB laser lighting into the projection display marketplace."

Lasers have long been recognized for their potential as illumination sources for projection applications due to their wide color gamut and high light energy efficiency. Historically, however, they have lacked the power, small form factor and cost performance to realize laser-based projection display.

NECSEL lasers are housed in an innovative package smaller than a matchbox. All NECSEL light sources produce color-saturated output, allowing them to reach a larger color space than competitive lighting technologies.