New types of flexible an refreshable displays based on OLEDs and "paper-like" materials will take the market by storm over the next five years, generating sales worth more than $10billion. optics.org looks at the writing on the wall.

OLEDs and paper-like display technologies are rapidly creating novel applications and market opportunities for the display industry. On the back of these, combined sales of these relatively new technologies will reach $10.2 billion by 2011 and $14.7 billion by 2013, claims a report from NanoMarkets LC, a research firm based in Glen Allen, VA, US.

A key driver for both OLED displays and paper-like displays is their low-cost manufacturability. Both technologies can be created on flexible substrates such as plastic or foil - and perhaps even paper, NanoMarkets claims.

"Advances in both inks and equipment are enabling OLED displays to be printed, which is significantly cutting the capital costs associated with display manufacturing. Both of these factors will drive down the total cost of displays, which is a key element for this market's growth prospects," he adds. 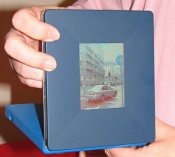 Paper-like displays are the first technology to offer the combination of visual clarity, cost points and networking capabilities that enable retailers to update product information continuously. This capability is one of the main reasons that shelf-edge displays will be the biggest opportunity for the paper-like display business in the next few years, generating $1.2 billion of the technologies' total annual revenues by 2011.

OLED technology is forecast by NanoMarkets to "soon have the color quality and resolution required for the television market". OLED televisions themselves are set to reach $2.2 billion in revenues by 2011 and are expected to take a slice out of the LCD television business.

The flexible substrates of both of these display types also make it possible to expand the potential of mobile computing. New forms of flexible displays are increasing the utility of mobile phones, PDAs and other related consumer electronic devices. NanoMarkets predicts that by 2011, flexible displays will account for $1.7 billion in revenues.

Scope of the report

The report examines the opportunities stemming from the latest generation of OLED and paper-like solutions in a range of applications including advertising and shelf-edge displays, billboards, flat-screen televisions, desktop and notebook computers, book and newspaper readers, mobile phones, PDAs, MP3 players and disposable electronics.

"Considering OLED developments, TVs are a pretty hot market because they are such widespread products," says Gasman. "On the e-paper side we believe there are market opportunities in ink-free signage such as in shelf-edge displays in retail. Retailers in the US tend to be early adopters . In Japan people are quite commonly reading books on PDAs, the bookreader is popular in that country."

As far as OLEDs are concerned they are also a maturing technology probably worth sales of several hundred million dollars worldwide. Even though they are relatively small, lower powered displays they have found quite a significant market in "lower end" cell phones.

"What is not yet mature about OLEDs is that there is another key stage i.e. using them in larger displays. The required transition to achieve this is that the small molecules upon which they are based need to become polymers to increase the scale," says Gasman.

The machinery and the inks (for e-paper) are both on the verge of becoming mature but they percentage of displays that will be polymer based even by nest year will still be small.

"Eventually we believe that paper-like displays will have the look and feel of paper. Somebody has asked what e-paper materials and OLED display materials should be printed on and one answer could be paper itself although it may not be sturdy enough," he says.