Corning predicts that the market for Gen 5.5 substrates and above could grow by 150% in 2006. The US display glass maker gives James Tyrrell the latest market breakdown.

In February, Peter Volanakis, Corning's chief operating officer (COO), told investors that the firm expects the LCD glass market to grow by more than 40% this year, measured in square feet of glass. Over the 2005-2007 period, Corning expects LCD TV glass demand to grow from 210 to 583 million square feet of glass. As consumers turn on to high definition television (HDTV) in 2006, Corning expects the market for Gen 5.5 and above to grow by 150%.

LCD TVs took around 11% of the television market last year and Corning thinks that market penetration will to rise to 25% by 2007. The average TV screen size, currently 23 inches, is likely to stretch to over 27 inches within just 24 months, accelerating the growth of the glass substrate market. 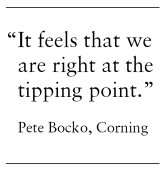 Corning like all players in the buoyant and highly competitive display industry is closely monitoring LCD TV uptake and its analysis makes interesting reading. "Black-and-white televisions started to be replaced very rapidly when there was a 3x cost difference between black-and-white and colour versions," Pete Bocko, Corning's division vice president and director of commercial technology, display told OLE. "To test the model, we went back and looked at desktop computer monitors and saw that the curve started to take off when the price of an LCD monitor was 3x the price of a CRT monitor."

If the analysis holds, then glass substrate suppliers can expect demand to soar, especially as consumers opt for larger screen sizes. "In terms of the overall market, it feels that we are right at the tipping point and are going to see very rapid substitution of LCD into TV," revealed Bocko. "I believe that LCD will have a strong play in the low 50 inch range and some of our customers are very serious about going up to 60 inches with LCD." However, what the data doesn't reveal is where the boundary will lie between LCD, plasma and micro-projection televisions. Bocko's view is that it is just a case of having to wait and see.

Bocko feels that right now the US market is being slowed by the availability of HDTV programming. "There is going to be much more pull once the amount of programming for HDTV accelerates," he commented.

According to Bocko, price is still a barrier on really large size televisions although smaller sizes, such as the popular 32 inch version, are now looking very competitive. "In the last 6 months, I have started to notice that deep discount stores [in the US] have piles of 32-inch LCD TVs," he said. "So I think the path to market is straightening out."

What is clear is that the demand for big screen LCD TVs is driving glass suppliers to larger generation substrates. In 2005, Gen 5.5 and larger accounted for just 20% of the LCD glass market, but by 2007 Corning expects this figure to be closer to 50%. Larger glass sizes help panel manufacturers reduce production costs and increases the range of panel sizes for LCD TVs. In fact, Corning has announced that it aims to begin shipping its Gen 8 substrates later this year.

Large panels may be an attractive solution in terms of size, but as Bocko explains they place high demands on manufacturing quality, especially for HDTV viewing. "There are a variety of wide viewing angle modes, but all of them sensitize the television to minute thickness variations in the glass," he said. "You have to start with extraordinarily flat glass." Some analysts are talking about other challenges such as a shortage in backlighting components, but Bocko doesn't see this as a significant issue in the longer term.

Taking a wider view of the LCD substrate market, growth of colour mobile phones, continued notebook penetration into the personal computer sector and the displacement of CRTs desktop monitors by LCDs are all contributing factors. Considering the market as a whole, Corning thinks that there will be approximately a 75% increase in total market glass demand by 2007.