Laser heating of tiny gold particles helps researchers in France to observe how a rat's brain is wired up.

Scientists could be a step closer to unraveling the mysteries of human memory thanks to a nanoparticle-based imaging technique developed at Bordeaux University. The team is observing how biomolecules change position within a cultured rat synapse, the junction between nerve cells, by labeling the biomolecules with tiny gold particles.

"If you shine a laser on a nanoparticle then almost all of the energy absorbed will be released as heat to the surroundings," researcher, Laurent Cognet told Optics.org. "This so-called photothermal effect modifies the refractive index of the adjacent media, and can be used to pinpoint the nanoparticle." 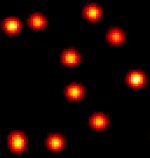 The scientists originally came up with their particle-based imaging method simply to overcome the limitations of fluorescence microscopy, which include short observation times as a result of photobleaching.

"This gold nanoparticle technique is very important, because it means that we can now study non-fluorescent nano-objects," explained group leader, Brahim Lounis. "The resolution is limited by the optical set-up, but we have the sensitivity to detect particles that are as small as 2.5 nm."

Based on a closed-loop scanning platform, the Bordeaux technique involves the use of two lasers. The first, a time-modulated (100 kHz - 15 MHz) Nd:Yag laser (532 nm) is used to heat the nanoparticle. The second, a HeNe laser (633 nm) aimed at the sample and coupled to a fast photodiode detector, tracks the position of the nano-object by locking on to the characteristic beat frequency in the reflected signal.