Optical sensor could save landmarks

A £500,000 EPSRC project to equip limestone buildings with fiber optic sensors could help protect historic landmarks such as London's St. Paul's Cathedral. Although basic knowledge exists about the general causes of limestone decay, it is not understood why the process takes place in unpredictable fits and starts and accelerates in some parts of a building, but not in others. 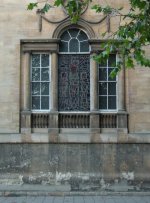 By developing new optical sensors that monitor how limestone blocks are affected by traffic pollution, road salt, temperature, humidity and wetness, scientists hope to solve this mystery. The collaborative three year research program involves experts at Queen's University Belfast, City University London and Oxford University and could save money by preventing the need for early replacement of limestone blocks.

Previously, the team has been successful in devising fiber sensors for observing the carbonation of concrete, which worked by measuring changes in pH, and also in studying the breakdown of sandstone.

"This is the first time that electronic and other engineering expertise has been applied to the problem of rapid limestone decay," said Heather Viles, a specialist in weathering and rock breakdown based at Oxford University. "[The work] brings together engineers and geomorphologists and will benefit [both] renovation and new-build projects."

The idea is that the measured decay will be correlated with the limestone's precise physical, chemical and mineralogical characteristics along with environmental factors. Optical sensors will be installed initially in a boundary wall at Worcester College, Oxford, UK.

Building limestone used in the UK dates from the Jurassic period, 150-200 million years ago. The rock's dominant mineral is calcite, which is highly prone to chemical attack by acid rain. If left untreated, the decay can spiral out of control and cause buildings to collapse.