A solar-powered handbag with an electroluminescent interior makes spotting keys and other elusive items easy.

Anyone who has wasted time rummaging around the bottom of a bag for house keys on a dark night would appreciate Rosanna Kilfedder's electroluminescent handbag. Powered by a thin film solar panel, the bag's electroluminescent lining lights up to reveal its contents when unzipped.

The lining is deactivated as the zip is closed, or after 15 seconds to conserve power if the bag is accidentally left open. Sewn into one side, the handbag's 6% efficient solar panel charges an internal battery. As well as powering the lining, the battery can be used to run mobile phones or music players. 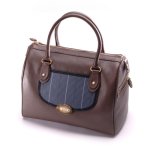 "I thought this would be a good way of solving the problem of being stuck late at night with a dead mobile battery," said Rosanna Kilfedder, a design student at Brunel University, UK. "I was thinking about safety and had the idea of including a portable charger."

"I plan to work with manufacturers to produce and sell a range of Sun Trap bags," added Kilfedder. "The bag [currently] exists at prototype stage and I aim to have it on the market within the year."