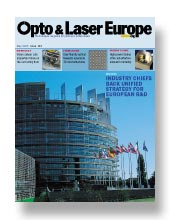 Can European photonics remain competitive with firms in Asia and the US? Yes, but only if a new, unified approach to research is adopted, says EPIC. Oliver Graydon investigates.

Danish scientists have harnessed the power of light beams to manipulate 3D arrangements of particles at the click of a mouse button. Rob van den Berg reports.

High-power diode bars that are highly efficient and boast output powers of hundreds of watts are now commercially available. Merrill Apter gives a tutorial on the technology.

Obtaining back issues: Hard copies of earlier issues of Opto & Laser Europe can normally be obtained by contacting our circulation/marketing manager, Angela Peck, by e-mail on angela.peck@iop.org