Visitors to the 2005 World Expo get the chance to see the world’s largest kaleidoscope.

The world’s largest optical kaleidoscope has been constructed in Japan as a permanent exhibit at the 2005 World Expo which is currently taking place near Nagoya. 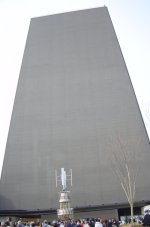 Officially opened on 25 March, the so-called “Earth Tower” consists of a 47 m high triangular tower housing a set of mirrored surfaces and three gigantic revolving discs. Sunlight entering the building interacts with the moving discs and mirrors to produce a constantly changing 40 m diameter spherical image with “infinite colours and shapes”. The image is viewed by observers inside the base of the tower.

The exhibit, which is Nagoya City’s contribution to the nearby Expo, has already been accredited by Guinness World Records and has proved to be a big hit at the event resulting in long queues of curious visitors.

Although Fumiya Fuji the designer of the Earth Tower hopes that it will create feelings of serenity and tenderness, the editor of Optics.org experienced mainly neck-ache and dizziness. However, there’s no denying that the images were magnificent.

The kaleidoscope, which means “beautiful form to see” in Greek, was invented in 1816 by the Scottish scientist Sir David Brewster, while he has was experimenting with prisms and mirrors.

It produces beautiful symmetrical patterns with a structure that depends on the number of the mirrors and their angular alignment. Today, the most common version consists of a small tube containing a set of mirrors and light-scattering objects such as small beads of glass.