Dresden, Germany – The eleventh ZEISS Women Award was yesterday awarded in Dresden, Germany. This prize honors outstanding female informatics students who are about to graduate. The award was offered throughout Germany and serves as a platform to publicly recognize successful young women in the digital sector and to encourage more women to consider a career in the field. The 2021 award winners are three strong young informatics students who engage with social issues alongside their studies and have personalities that make them ideal role models. 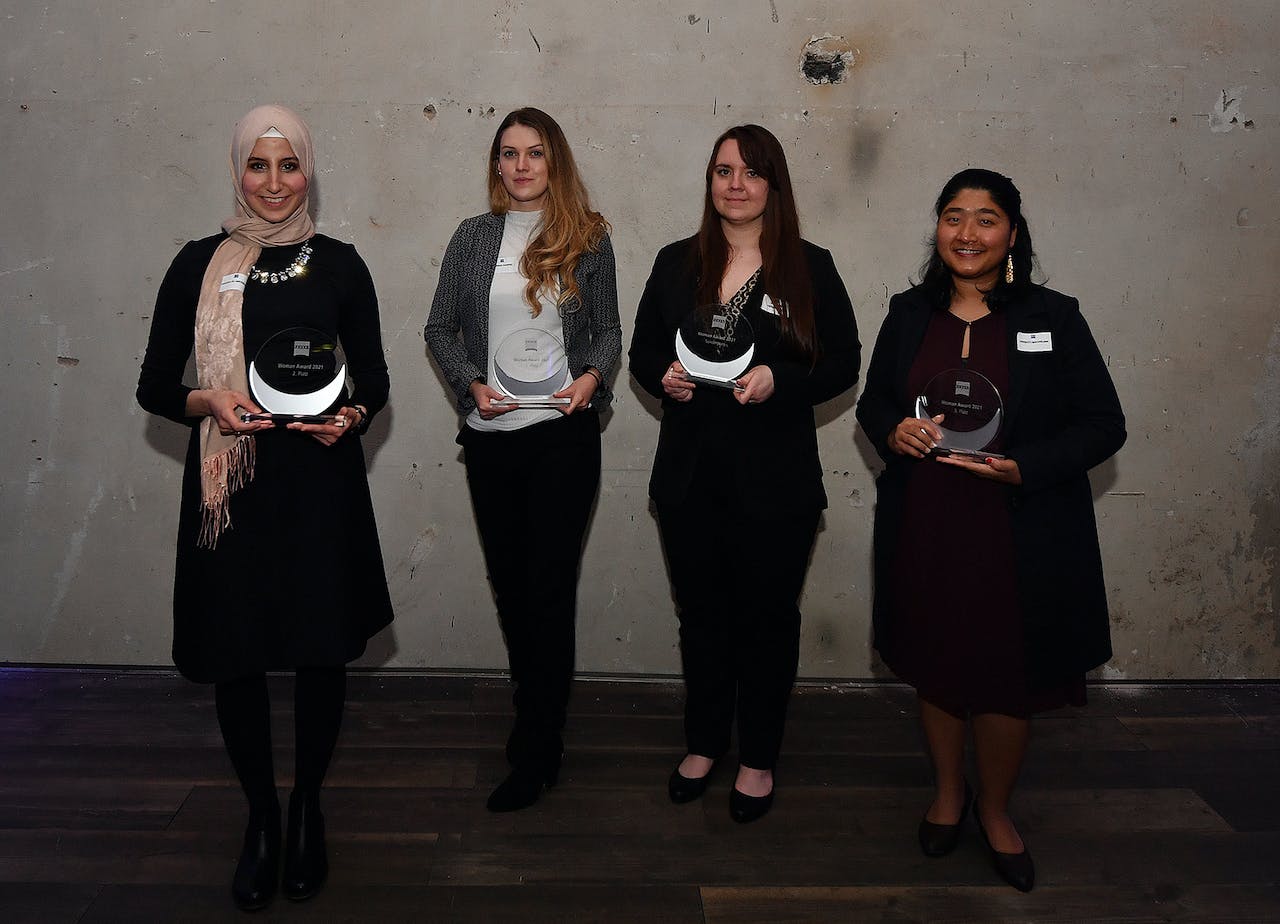 Corina Hampel took first place. She studies informatics in the master's program at the University of Aalen and has specialized in IT security. The runner-up is Houda El-Messari. She studied at the Technical University of Berlin and has completed her Master of Science in computational engineering science.

Maharjan Drishti placed third. She originates from Nepal, studied at the Jacobs University Bremen and just submitted her bachelor's thesis. A special prize was also awarded to Sarah-Lee Mendenhall, Master of Science at the HTW Berlin. The young mother, who took a completely new career path after her training as a doctor's assistant, impressed the jury with her extraordinary résumé and her determination.

The ZEISS Women Award is ZEISS' effort to focus on diverse career opportunities for women working in computer science. Currently, the proportion of women in the workforce of the technology company operating worldwide is between 30 and 35 percent, depending on the country.

This reflects the general trend among the female STEM graduates. The company has therefore set itself the goal of promoting women in the company through a family-friendly, systematic personnel policy and also externally, for example by cooperating with universities, to ensure that more girls and women are interested in STEM professions and thus also in IT.

"The ZEISS Women Award is an important platform to focus on talented women in computer science, thus creating role models for the next generation. With events like these as well as other activities to promote STEM, we at ZEISS want to do our part to spark children's and young people's curiosity in the STEM field," says Matthias Gohl, head of the ZEISS Digital Partners.

The ZEISS Women Award was first launched in 2011 as "Woman Award" by the Dresden-based IT company Saxonia Systems AG, which today belongs to the ZEISS Group. Initiator Viola Klein was concerned about the then very low number of women in IT degree programs at the universities in Saxony and wanted to encourage young women to look into getting a degree in the IT field.

Sponsor Elke Büdenbender plays an active role in making talented women in IT visible. The Women Award is sponsored by Elke Büdenbender, wife of German President Frank-Walter Steinmeier. The lawyer explains in her video message:

"Even if the image of the nerdy IT guy still prevails in public, talented women in IT do exist! We have to make them visible, and the Women Award is an important tool to do this. It is always a pleasure for me to show the world the wonderful careers of the award winners, which I hope will inspire young women to choose a career in IT."

The ZEISS Women Award prize was available throughout Germany. Women studying IT, business informatics or a similar degree program were able to apply, regardless of whether they are working on a bachelor's, master's or "Diplom" degree. Top grades (German grade average of ≤2.0) were required as well as the students working on their thesis or just having completed it.

The female students' commitment to society and their local community, for example via a club or their educational institution, was also part of the assessment. This year's 98 applications from all over Germany was a record compared to last year's 42.

An eight-member jury composed of successful women from the worlds of science and business selected the award winners. "It was a very tough decision," explains Dr. Julia Freudenberg, CEO of the Hacker School, representing the jury members. "There were such great applications.

So it was a real challenge to rate everyone. For me, each of these young women is an amazing role model." This prompted the jury to award a special prize.

The first place of the ZEISS Women Award is endowed with an honor and 2000 euros. The second and third place as well as the special prize also include prize money.

Further information on the concept of the ZEISS Women Award, the jury, etc.: https://www.zeiss.com/corporate/int/careers/digital-it-at-zeiss/zeiss-women-award.html

Corina Hampel studies informatics in the master's program at the University of Aalen and has specialized in IT security. In her master's thesis she created a framework – a programming framework – which makes it easier for software developers to effectively detect security risks when programming their digital solutions.

She also volunteers as a computer scientist, for example at the Aalen Children's University as an instructor. According to the 27-year-old, the fact that she herself found her way to the IT degree program is based on several coincidences. She believes that the image of a computer scientist and the conditions are still incorrectly communicated and fraught with prejudice.

Even career counselors are often not aware of the diversity of professions and fields where computer science is in demand. That's why she advocates creating awareness among girls, especially between the ages of 12 and 16, of the colorful range of options.