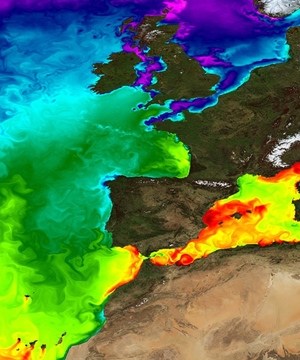 by Ford Burkhart in San Diego
After a summer of extreme heat, forest fires, and melting Arctic ice, the European meterological satellite agency, EUMETSAT, is considering adding the capability to track greenhouse gases, a speaker has told SPIE’s Optics+Photonics symposium in San Diego.

K. Dieter Klaes, deputy head of the organization’s remote sensing and products division in Darmstadt, Germany, told a remote sensing plenary session that EUMETSAT had a secure future: “We are assuring continuity,” he told delegates, “and that is remarkable.”

Growing constellation
With long-standing experience capturing images of volcanic clouds, tracking rising seas measuring to the inch, and forecasting hurricanes and typhoons, EUMETSAT already covers a lot of the bases when it comes to weather and climate data.

It is also, along with the European Space Agency (ESA), responsible for operating the various Sentinel satellites that make up the Copernicus constellation for Earth observation applications – and which rely on a range of cutting-edge optics and photonics equipment.

By the end of the year, the orbiting payload count will have swelled further, thanks to the launch of a third satellite to the polar EPS/Metop network. The low-Earth orbit “Metop-C” will carry a suite of eight instruments, including an advanced scatterometer, UV spectrometer for ozone monitoring, and infrared atmospheric sounding interferometer.

As for monitoring greenhouse gases, Klaes remarked: “We don’t do it now, but we are looking into it. I can’t say we are sure we will do it. It will be decided by the 30 member states.”

Klaes also told the San Diego conference that EUMETSAT was looking for ways to extend its global user base beyond its European members, and gave an update on dozens of missions and projects involving not just the ESA but NASA, the US National National Oceanic and Atmospheric Administration (NOAA), plus partners in Canada, China, India, Japan, Russia, and Korea.

Altogether, EUMETSAT has a total of 10 satellites under its responsibility, Klaes said. And with a project lifetime of 7.5 years per satellite a long-term perspective is critical.

Showcasing the kind of imagery that is now collected on a regular basis, Klaes played a video of the Eyjafjallajökull volcano ash cloud following its eruption in Iceland in May 2010. The event grounded more than 100,000 flights in European airspace, leaving millions stranded.

He also showed imagery from forest fires in Greece in 2007, which he said is still under study by many research organizations, along with ozone monitoring and profiles.

Klaes noted that EUMETSAT satellites accurately predicted several hurricanes in 2017, preventing damage to property and loss of life. How important is that satellite imagery? Klaes answered that by showing hurricane forecasts made with and without the benefit of satellite data:

“In the forecast without the satellites,” he said, “there is no hurricane.”