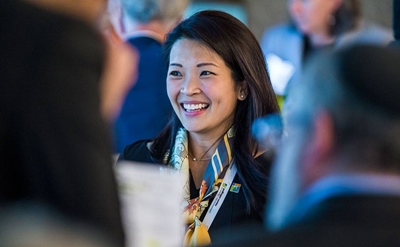 by Ford Burkhart in San Diego
A new twist on “smart” windows - those featuring on-board solar power - may disrupt the expected $9 billion market for such installations, a Princeton University professor has claimed at the SPIE Optics+Photonics symposium.

Smart windows keep out heat in summer and let it enter in winter. Existing versions need wiring, increasing their cost by up to 20 per cent. “That was a huge impediment to them,” said Lynn Loo, director of the Andlinger Center for Energy and the Environment at Princeton.

Loo, a pioneer in organic and plastic electronics, was speaking during her plenary presentation at the San Diego event. She added: “But we have provided the on-board power solution, by combining a solar cell with the window. We found a niche to apply this idea.”

Her company, Andluca Technologies, spun out of Princeton last year, and though it is still developing the technology ahead of a product launch, prototypes are working and the next stage will involve scaling up for production.

Peel off and power up
Established in 2017 after more than 12 years of research on light-responsive films at the Princeton lab, Andluca is looking beyond the main target of creating self-powered smart windows for new and retrofitted buildings – it is also working on versions of the technology suitable for automobiles.

Featuring a large transparent photovoltaic cell on one side of the window, and glass on the other, the electrochromic devices change color in response to electric signals to control visible and near-infrared light transmission. There’s no need for wiring during installation – the material can be simply peeled off a backing and stuck onto an existing window.

There’s no way to do that with conventional silicon solar cells, which absorb all visible light – hence their black appearance. Instead, Loo has worked with derivatives of the organic semiconductor material contorted hexabenzocoronene (cHBC).

In turn, the electrochromic polymers that control the tint are powered by the solar cell. Near-ultraviolet solar light generates the electrical charge in the cell, changing the window's appearance from clear to dark blue as it blocks out more light.

“Organic semiconductors are perfect for this kind of work,” said Loo in her plenary address. “We like to say this makes smart windows ‘smarter’.”

Investors take note
Smart windows can automatically regulate light and heat transmission to increase occupant comfort and reduce energy use by between 10 and 20 per cent, added the Princeton professor, also noting that annual growth of 23 per cent is predicted for this particular solar sub-sector.

There's no doubt that the commercial potential for electrochromic glass has captured the attention of investors - last year private equity giant Blackrock provided $70 million of a total $200 million funding round completed by California-based pioneer View, Inc.

View has subsequently completed several major installations, including at Dallas Fort Worth airport after pilot tests indicated that the technology would reduce HVAC and lighting energy usage by up to 15 per cent in terminal buildings during peak periods.

But Loo sees the potential for even smarter approaches. “It is the intelligent management of sunlight,” she said, also pointing out that by capturing UV light, the windows generate more energy than is required to merely operate the color-shifting electrochromic element - a feature that may open up further applications in energy storage for powering WiFi communication, or to permit remote-controlled operation.