Dynetics to lead next phase of US Army's 100kW laser weapon 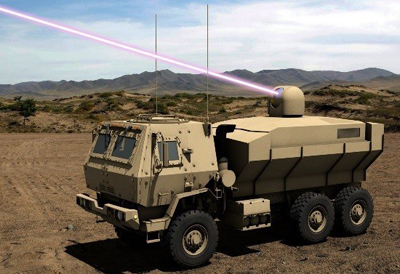 The US Army has awarded Dynetics, Lockheed Martin and partners a $10 million contract to continue development for the next phase of the High Energy Laser Tactical Vehicle Demonstrator (HEL TVD) program, a 100-kilowatt class laser weapon system.

The team recently completed a System Requirements Review and technical baseline update. The next step in the program will be the preliminary design review in January 2019, with a Raytheon team also competing for the final down-selection.

"The HEL TVD program will be pivotal for the warfighters while they are protecting our country. Dynetics, Lockheed Martin and our partners are providing a safe and simple high energy laser weapon system that crews can operate for years to come and across various terrains," said Ronnie Chronister, Dynetics vice president of contracts.

"We pulled together a cross-industry leading team, which has the expertise and knowledge to understand exactly what is needed. We believe that our solution will be straightforward and will be the type of system that will preferred by the Army."

Cross-industry team
Dynetics is drawing on the experience of systems engineering, manufacturing, test and vehicle modifications for integration on the Family of Medium Tactical Vehicles.

"The Army's HEL TVD program is a critical step toward realizing this potential, culminating in 2022 testing of a mobile 100 kW-class laser weapon system fully integrated with an Army FMTV truck."

Lockheed Martin has more than 40 years of experience developing laser weapon systems. The HEL TVD award leverages technology building blocks from internal research and development projects, including the ATHENA system and ALADIN laser, as well as contract experience gained from programs such as the US Army's RELI program, the US Air Force LANCE program and the US Navy’s HELIOS and HEFL programs.

Team Dynetics is one of two remaining contractors competing to build the demonstrator that will be tested in 2022. The winning contractor will be awarded a contract option to finish the design, build and integrate the laser weapon system onto an Army FMTV platform and conduct field testing at White Sands Missile Range in New Mexico.