German Research Center for Geosciences reports on how existing data cables can pick up seismic signals. 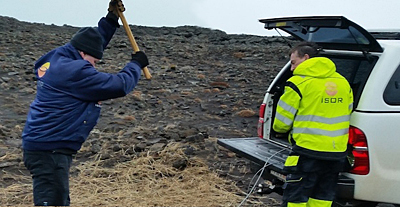 Fiber-optic cables can be used to detect earthquakes and other ground movements.

Fiber-optic cables – including the networks already deployed for communications purposes – can be used to detect earthquakes and other ground movements. The optical data cables can also pick up seismic signals from hammer shots, passing cars or wave movements in the ocean.

These are some of the significant conclusions of a study published in Nature Communications. Its main authors are Philippe Jousset and Thomas Reinsch from GFZ German Research Centre for Geosciences (GFZ), section Geothermal Energy Systems, in Potsdam, Germany. The scientists carried out the investigation together with colleagues from Iceland, the UK, as well as Berlin, Germany.

The scientists sent pulses of laser light through an optical fiber, which was part of a 15 kilometer-long cable deployed in 1994, within the telecommunication network on Reykjanes peninsula, south west Iceland, crossing a well-known geological fault zone in the rift between Eurasian and American tectonic plates.

The light signal was analyzed and compared to data sets from a dense network of seismographs. The experts commented that the results “amazed” them.

“Our measurements revealed structural features in the underground with unprecedented resolution and yielded signals equaling data points every four meters”, said Philippe Jousset from the GFZ. He adds: “This is denser than any seismological network worldwide.” 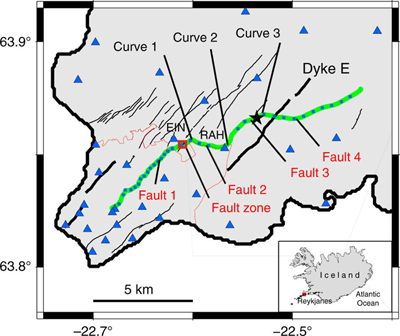 Location of the fibre-optic cable in Reykjanes, Iceland. Click for more info.

After presenting preliminary ideas at several conferences since 2016 Jousset was told that the new method was a "game changer for seismology". Although the method is not new in other applications (it is used for years in boreholes for reservoir monitoring), the team is the first worldwide that carried out such measurements along the surface of the ground for seismological objectives, and with such a long cable.

Their current study not only shows well-known faults and volcanic dykes. The scientists also found a previously unknown fault, below the ground surface. Furthermore, the team measured subsurface deformation taking place over a period of several minutes.

Small local earthquakes, waves originating from large distant quakes, and microseism of the ocean floor were also recorded via fibre-optic cable. “We only need one strand of a modern fibre-optic line”, said Charlotte Krawczyk, Director of GFZ’s Geophysics Department.

The advantages of the new method are enormous as there are countless fibre-optic cables spanning the globe in the dense telecommunication network. Especially beneath megacities with high seismic hazards, such as San Francisco, Mexico City, Tokyo, or Istanbul, and many others, such cables could provide a cost efficient and widely spread addition to existing seismological measuring devices.

Future studies are planned to investigate whether deep-sea cables can also be used for seismic measurements. The scientists are optimistic. They think that the cables on the sea floor will detect submarine earthquakes, ground motions of tectonic plates, and also variations of the water pressure. Thus, the new method will help seismologists as well as oceanographers.

In related news, in October 2017, Stanford University announced that researchers there had built a billion sensor earthquake observatory based on a network of optical fibers. The university commented that “the very same optical fibers that deliver internet and HD video around the San Francisco Bay Area could double as seismic sensors for monitoring earthquakes”. 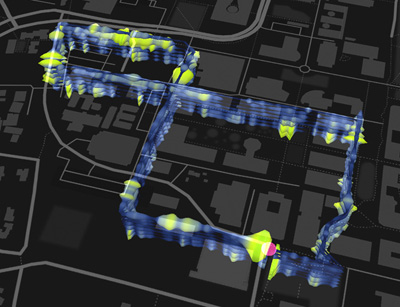 The 3-mile, figure-8 loop of optical fibres installed beneath the Stanford campus.

Biondo Biondi, a professor of geophysics at Stanford’s School of Earth, Energy & Environmental Sciences, said he was aiming to “turn the dense optical communications network of fiber optic cables into an inexpensive billion sensor observatory for continuously monitoring and studying earthquakes.”

Biondi added that his group showed that it is possible to convert the jiggles of perturbed optical fibre strands into information about the direction and magnitude of seismic events. The researchers have been recording those seismic jiggles in a three-mile loop of optical fibre installed beneath the Stanford University campus with instruments called laser interrogators provided by the company OptaSense, which is a co-author on publications about the research.

“We can continuously listen to – and hear well – the Earth using preexisting optical fibres that have been deployed for telecom purposes,” Biondi said.