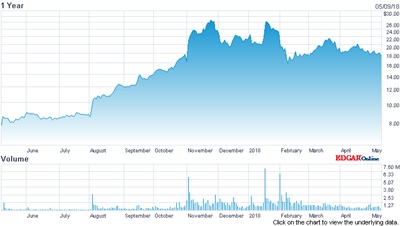 Electro Scientific Industries (ESI), the Portland, Oregon, laser micromachining systems company, has revealed a pre-tax income of $76 million for its latest financial year, capping an extraordinary turnaround over the past 12 months.

Hailed by CEO Michael Burger as evidence of a “fantastic” and “transformative” year, the results reflect the strength of the current demand cycle in semiconductor and electronics manufacturing, as well as a series of restructuring moves made by the company since 2014.

Bumper year
At $325 million, sales in the year to March 31, 2018, rose more than 250 per cent on the previous year’s total of $125 million. And it appears that the strong momentum will continue into the new financial year, with orders of $112 million in the latest quarter up 36 per cent on the same time last year.

“We delivered another quarter of exceptional financial results, which closed out a defining and transformative year for ESI,” said Burger, adding: “We enter our fiscal 2019 with a product portfolio that is retaining or growing market share.”

While he recognizes that the sort of markets in which ESI operates will inevitably cycle up and down, Burger believes that long-term technology trends and drivers are in the company’s favor.

“Through the cycles our technology advantages and lower fixed cost base should allow us to generate solid earnings in all market conditions,” he told investors, adding that the past couple of months have witnessed a slight softening of demand in some areas.

“We've been clear that at some point our customers’ demand would pause, while they absorb the massive amount of new drilling capacity,” the CEO said, although he believes that the proliferation of flexible circuits, smart phones, and other new consumer devices – all of which require electrical interconnects and therefore holes to be laser-drilled – will ensure solid future business.

$500M sales target
To maintain market share in what is a competitive area, Burger said that ESI would launch a new flagship laser platform in the summer. “This product will continue to distance us from our competition and further raise the barriers to entry into this market,” he claimed, pointing to the company’s annual sales target of $500 million within three years – expected to result from organic growth alone.

Sales of ESI’s semiconductor wafer scribing, marking, and trimming tools shot up in the latest quarter, rising 200 per cent year-on-year, and nearly doubling in the full financial year.

“This market has been driven primarily by China's investment in building semiconductor manufacturing capacity,” Burger explained, adding: “While these products will continue to grow, we do not expect that they will repeat this year's growth rate in the short-term.”

ESI is also set to release a new laser drilling system for rigid circuit boards, where the company is yet to make many inroads. “This tool will possess the key technical capabilities that differentiate our ‘Flex’ drilling tools,” Burger said, with a release expected by the end of the calendar year.

• Despite the outstanding annual results, ESI’s Nasdaq-listed stock price fell in value by around 5 per cent following the release, perhaps reflecting the hints of a demand “pause” while circuit manufacturers digest their recent purchases.