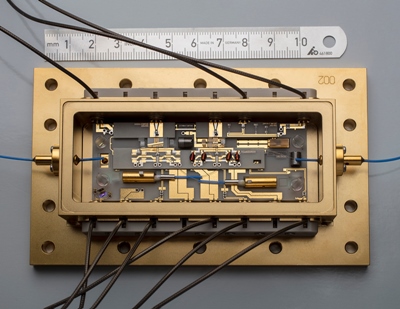 A team of laser scientists in Germany say that their optical frequency reference setup has successfully completed a test run on a sounding rocket.

Potentially, the achievement paves the way to a future satellite navigation system based on optical technology, as well as space-based quantum systems, and orbiting laser interferometers for gravitational wave detection.

The “JOKARUS” experiment, developed by researchers and engineers from the Ferdinand Braun Institute (FBH) and Humboldt University in Berlin (HUB), Menlo Systems, and elsewhere, uses an active optical frequency reference based on laser absorption by molecular iodine. The JOKARUS acronym is short for “iodine comb resonator under weightlessness” in German.

Outlined in this 2017 journal paper, JOKARUS is based around a compact 1064 nm extended-cavity diode laser (ECDL), with an integrated optical ampliﬁer, and a ﬁber-pigtailed waveguide module for second-harmonic generation.

In the sounding rocket test, carried out May 13, that system was compared directly to a separate measurement made by an optical frequency comb on board the same flight.

“Thanks to integrated software and algorithms, the [ECDL] system worked completely independently,” said the FBH/HUB team, adding that the tests showed fully automated frequency stabilization by the new hardware.

Stepping stone to orbital system
Developed by the FBH and HUB’s joint laser metrology laboratory, JOKARUS also features a quasi-monolithic spectroscopy module provided by the University of Bremen, with electronics from Menlo Sytems, and an acousto-optic modulator from Gooch & Housego.

A polarization-maintaining singlemode optical fiber then divides the modulated, frequency-doubled beam into two paths, for Doppler-free saturation spectroscopy on an iodine cell.

In their earlier paper, the team led by Vladimir Schkolnik reported that the sounding rocket test - which typically last for only a few minutes - represented a “stepping stone” towards future deployment of a full system in orbit.

If that does prove possible, the compact units could then help to provide ultra-precise time synchronization of separate satellites, perhaps in giant future space interferometer systems used to detect gravitational waves that cannot be measured on Earth, or in future quantum-optical systems for ultra-secure communication.

“The assembly integration technology used for the iodine spectroscopy setup is a very promising technology for realization of compact and ruggedized space optical systems,” wrote the team in last year’s paper describing the JOKARUS hardware, adding that the proposed Laser Interferometer Space Antenna (LISA) mission could be one project to benefit from the development.

“Future space missions using laser or atom interferometry, or the development of space optical clocks, may beneﬁt from this technology heritage and its ﬁrst applications in space missions,” they concluded.