Computational photography based on laser transmissions could solve a problem that has long limited potential of self-driving cars. 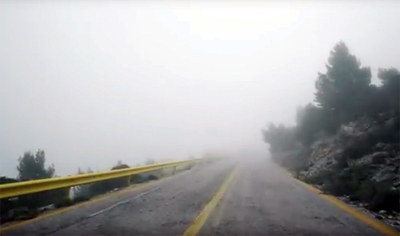 Foggy mountain breakdown: system could be a crucial step toward self-driving cars.

Researchers at MIT, Cambridge, Ma, have developed a camera-based system that can produce images of objects shrouded by fog so thick that human vision cannot perceive it. The system can also gauge the objects’ distance from the viewpoint.

An inability to cope with misty driving conditions has been one of the chief obstacles to the development of autonomous vehicular navigation systems based on visible light, says Guy Satat, a graduate student in the MIT Media Lab, who led the research. For this purpose visible light systems are preferred over radar-based systems for their high resolution and ability to read road signs and track lane markers. “So, this MIT system could be a crucial step toward self-driving cars,” Satat commented.

The researchers tested the system using a small tank of water in which the vibrating motor from a humidifier was immersed. In fog so dense that human vision could penetrate only 36 cm, the system was able to resolve (identify) images of objects and gauge their depth at a range of 57 cm.

MIT commented, “Fifty-seven centimeters is not a great distance, but the fog produced for the study is far denser than any that a human driver would have to contend with; in the real world, a typical fog might afford a visibility of about 30 to 50 meters.” The important point is that the system performed better than human vision, whereas most conventional imaging systems perform far worse. A navigation system that was even as good as a human driver at driving in fog would be a huge breakthrough.

Satat added, “I decided to take on the challenge of developing a system that can see through actual fog. We’re dealing with realistic fog, which is dense, dynamic, and heterogeneous. It is constantly moving and changing, with patches of denser or less-dense fog. Other methods are not designed to cope with such realistic scenarios.”

The MIT team describe their system in a paper they will be presenting at the International Conference on Computational Photography in May 2018 in Pittsburgh, Pa. Satat is first author on the paper, and he’s joined by his thesis advisor, associate professor of media arts and sciences Ramesh Raskar, and by Matthew Tancik, a graduate student in electrical engineering and computer science at the time of the project. 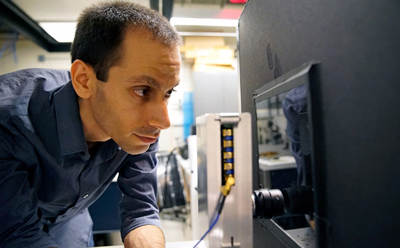 Time of flight and statistical analysis

Like many of the projects undertaken in Raskar’s Camera Culture Group, the new system uses a time-of-flight camera, which fires ultrashort bursts of laser light into a scene and measures the time it takes their reflections to return.

On a clear day, the light’s return time faithfully indicates the distances of the objects that reflected it. But fog causes light to scatter randomly. In foggy weather, most of the light that reaches the camera’s sensor will have been reflected by airborne water droplets, not by the types of objects that autonomous vehicles need to avoid.

The MIT system gets around these problems by using statistics. The patterns produced by fog-reflected light vary according to the fog’s density: On average, light penetrates less deeply into a thick fog than it does into a light fog. But the MIT researchers were able to show that, no matter how thick the fog, the arrival times of the reflected light adhere to a statistical pattern known as a gamma distribution.

The technical statistical basis of the MIT system’s ability to perceive objects is that its “Gamma” distributions of imaged points are more complex than “Gaussian” distributions, the common data distributions that yield the familiar bell curve: Gammas can be asymmetrical, and can take on a wider variety of shapes. But like Gaussian distributions, they’re completely described by two variables.

The MIT system estimates the values of those variables on the fly and uses the resulting distribution to filter fog reflection out of the light signal that reaches the time-of-flight camera’s sensor.

Crucially, the system calculates a different gamma distribution for each of the 1,024 pixels in the prototype sensor. That is why it can handle the variations in fog density that have foiled earlier systems: It can deal with circumstances in which each pixel sees a different type of fog. 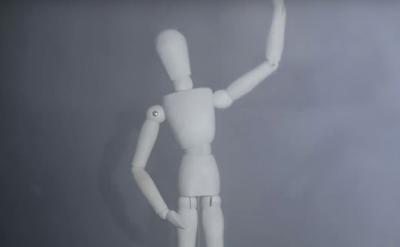 The camera counts the number of light particles, or photons, that reach it every 56 picoseconds, or trillionths of a second. The MIT system uses those raw counts to produce a histogram — essentially a bar graph, with the heights of the bars indicating the photon counts for each interval. Then it finds the gamma distribution that best fits the shape of the bar graph and simply subtracts the associated photon counts from the measured totals. What remain are slight spikes at the distances that correlate with physical obstacles.

“What’s nice about this is that it’s pretty simple,” said Satat . “If you look at the computation and the method, surprisingly it’s not complex. We also don’t need any prior knowledge about the fog and its density, which helps it to work in a wide range of fog conditions.”

Satat tested the system using a fog chamber one meter long. Inside the chamber, he mounted regularly-spaced distance markers, which provided a rough measure of visibility. He also placed a series of small objects — a wooden figurine, wooden blocks, silhouettes of letters — that the system was able to image these even when they were indiscernible to the naked eye.

There are different ways to measure visibility, however: Objects with different colors and textures are visible through fog at different distances. So, to assess the system’s performance, he used a more rigorous metric called optical depth, which describes the amount of light that penetrates the fog.

“Bad weather is one of the big remaining hurdles to address for autonomous driving technology,” says Srinivasa Narasimhan, a professor of computer science at Carnegie Mellon University. “Guy and Ramesh’s innovative work produces the best visibility enhancement I have seen at visible or near-infrared wavelengths and has the potential to be implemented on cars very soon.”

The following MIT video, made by researchers at the Camera Culture Group at the MIT Media Lab, describes the development of the novel imaging system that can gauge the distance of objects shrouded in fog: