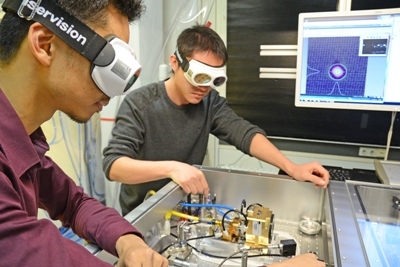 Scientists at Ludwig-Maximilians-University (LMU) and the Max-Planck-Institute of Quantum Optics (MPQ) in Munich, Germany, have published details of a new kind of broadband infrared light source that they believe will benefit a wide range of spectroscopy techniques.

Under the direction of ultrafast laser pioneer Ferenc Krausz and Oleg Pronin from MPQ, the development team includes researchers from the laser giant Trumpf – with which Krausz and MPQ have a long-standing collaboration.

With details just published in the Nature-affiliated journal Light: Science & Applications, the team has developed a compact and powerful source offering coverage between 4.5 µm and 20 µm – a close match to the all-important mid-infrared (MIR) spectrum that contains “fingerprint” molecular information.

Thin-disk design
Based around what is claimed to be the first mode-locked thin-disk oscillator operating at a 2 µm wavelength, the MPQ-Trumpf source delivers an average power of 24 mW over the two-octave spectral range.

“From the compact setup based on a Ho:YAG gain crystal, we obtained 18.7  W of average output power,” wrote the team in their paper. “This constitutes a ten-fold increase over the power of any femtosecond oscillator demonstrated in the >1.5 µm region before, and the thin-disk concept promises further power scalability.”

They say that their new approach should offer a superior alternative to optical parametric oscillator (OPO) systems, which offer similarly broad wavelength coverage but require expensive precision optical design and suffer from beam pointing issues when the central wavelength is tuned by crystal rotation.

The thin-disk laser at the heart of the system is pumped by a Tm-doped fiber laser emitting at 1.9 µm, with a multi-pass optical system used to increase optical-to-optical conversion efficiency to around 22 per cent.

“The average power demonstrated is currently limited only by the available pump power from a single Tm-fiber laser,” notes the team, adding that the thin-disk geometry – already widely used in Trumpf’s industrial laser products – is inherently scalable.

“A vast array of spectroscopic techniques, including time-resolved pump-probe spectroscopy, s-SNOM (scattering near-field optical microscopy), and, potentially, dual-comb spectroscopy, will benefit from the improved coverage and increased power from our compact source,” they claim.

Further broadening of the seed spectrum should also be possible, potentially extending the high-frequency edge of the MIR output to wavelengths shorter than 3.3 µm, where polymers and lipids have strong absorption lines.

“Together with the good power handling capability of GaSe at a 2 µm pump, we expect the MIR output, in terms of both power and spectral reach, to be significantly improved in the future,” concludes the team.

Attoscience pioneer
Back in 2012, Trumpf established its scientific lasers subsidiary, in a joint-venture arrangement with Krausz to develop and make ultrashort-pulse sources based on the German firm’s thin-disk designs.

While at Vienna University of Technology in the 1990s, Krausz pioneered the development of chirped mirrors to control pulse dispersion in ultrafast sources based on Ti:sapphire resonators – and in doing so produced the first “attosecond” pulses.

He also established the startup company Femtolasers, since acquired by Newport (now part of MKS Instruments) and a provider of ultrafast lasers used in high-profile systems including one of the beamlines of the Extreme Light Infrastructure (ELI) facility near Prague in the Czech Republic.