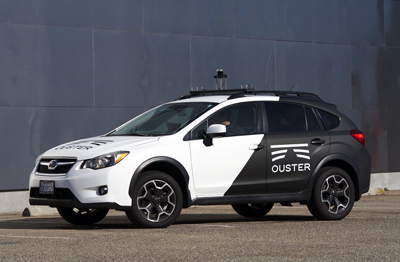 Ouster's technology is based on a two-chip design.

Ouster, a manufacturer of high-resolution lidar sensors, has announced details of its underlying technology, revealing a departure from what it calls “niche and high-cost materials that are commonly used in the lidar industry.

Ouster's statement adds that Its approach to lidar is “speeding the deployment of technology ranging from autonomous vehicles, to large-scale mobile robotics, to long-range mapping drones”.

This two chip lidar core contains no moving parts on the macro or micro scale while retaining the performance advantages of scanning systems through its multi-beam flash lidar technology. Ouster claims that its OS-1 64 sensor “costs nearly 85% less than competing sensors, making it the most economical sensor on the market. The company has decoupled cost from increases in resolution by placing all critical functionality on scalable semiconductor dies,” it states.

The OS-1 64 contains just two custom semiconductor chips capable of firing lasers and sensing the light that reflects back to the sensor. This approach replaces the thousands of discrete, delicately positioned components in a traditional lidar with just two.

In an article on the company's website, CEO Angus Pacala states, "Ouster has been granted foundational patents for our multi-beam flash lidar technology, which allows me to talk more openly about the incredible technology we've developed over the last three years and why we're going to lead the market with a portfolio of low-cost, compact, semiconductor-based lidar sensors in both scanning and solid state configurations."