French development based on avian perception can both save rare birds and minimize fatal accidents. 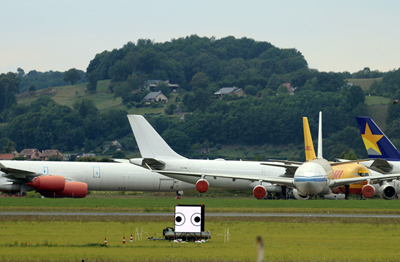 Researchers from the CNRS and Université de Rennes, all in France, in collaboration with Airbus, have designed a visual pattern that achieves long-term avoidance of high-risk areas by birds of prey (“raptors”) – such as at airports and around wind turbines.

The scientists’ work opens the way for further investigation into the visual cognition of such birds, and it has applications for conservation, because raptors are among the most common victims of collisions with airplanes and turbine blades. The work is published in PLOS ONE.

Despite their exceptional visual acuity, raptors do not perceive certain hazardous obstacles such as glazed surfaces, or they are too late in detecting some moving objects, like airplanes.

In France alone, over 800 collisions between birds and airplanes are reported each year, with 15% of these classified as serious incidents. As available deterrent systems are hardly effective with raptors (smart birds typically learn to ignore "predator dummies" in a matter of days), scientists from the Éthologie Animale et Humaine (Ethos) research laboratory decided to develop a new means of repelling these birds from specific areas.

But it is not just the birds that suffer from these collisions: as the PLOS ONE article reports, based on many long-term sets of accident data from across the world, bird collisions are also the cause of many airplane crashes and human fatalities:

“Birds of prey have been responsible for 47% and 100% of the fatalities with aeroplanes and with helicopters respectively, probably because of their large size (a notable example is the Hudson River Accident in 2009 caused by Canada Geese Brenta canadensis). About $1.2 billion is spent annually worldwide by air companies because of bird strikes.”

One pattern most effective

Applying current knowledge about vision in these species, the France-based team first observed how captive raptors reacted to a series of visual stimuli. After over 300 tests, they concluded that only one pattern triggered avoidance behavior, by virtue of an optical illusion. This ‘superstimulus’ consists of concentric black circles on a white background. It creates a so-called ‘looming’ effect, giving the birds the impression of an imminent collision. 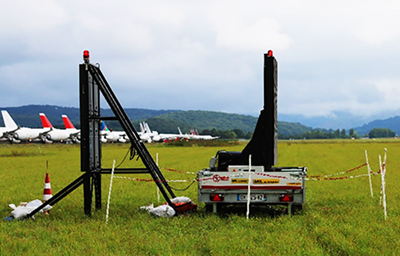 Screens showing the deterrent image were placed back to back at the airport.

The pattern was tested at Lourdes-Tarbes-Pyrénées Airport, near airplanes where raptors like buzzards and kites forage in the summer. It was displayed continuously throughout the day on two LED screens positioned in strategic locations, while a total of 8,800 observations were made at points all over the airport zone.

The team detected a rapid modification of the birds’ distribution: they stayed clear of areas from which the screens were visible. This avoidance behavior was still observable after five weeks of continuous pattern display.

The fact that the raptor population rose in places where the displays were out of view, at a time when their food supply was nonetheless abundant in all areas, is proof of the pattern’s efficacy. Interestingly, the visual stimulus triggered similar behavior among corvids at the site, but not other passerines.

The scientists concluded, “These findings are the first to describe a harmless, sustainable solution for repelling raptors from high-risk areas. They also suggest new areas of research, such as the possible role played in this behavior by collision-detecting neurons, specialized in avoidance reactions.”