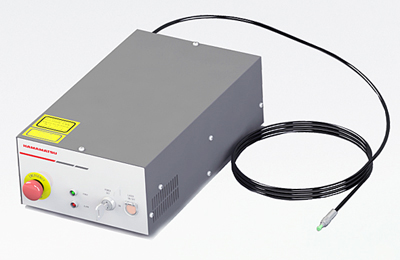 At the same time, the SC source maintains the high stability equivalent to that of xenon lamps by optimizing output conditions and also using a high nonlinear optical fiber as its nonlinear optical material. This source is targeting the market for measuring the complex structure of semiconductor optical measurements. The company added that its official commercial release will be in the spring of 2019.

The new SC light source was jointly developed with Prof. Norihiko Nishizawa’s research group at Nagoya University, Japan. It will be exhibited publicly for the first time at Photon Fair 2018, held for every five years at Act City Hamamatsu (Naka-ku, Hamamatsu City, Japan) between November 1st to 3rd. The new SC light source will also be demonstrated at Photonics West 2019, at the Moscone Center, San Francisco, California, from February 5th – 7th, 2019.

Further advances in microminiaturization of semiconductor devices means there is now a critical need for high brightness light sources to measure semiconductor microstructures even more accurately, stated the company. In the field of optical coherence tomography for capturing cross-sectional images of living bodies, there is an increasing demand for high brightness broad band light sources to monitor the interior of living bodies more precisely.

High-brightness SC light sources that emit a broad spectrum of light are already commercially available to meet these needs in various measurement applications. However, the radiant output from those SC light sources is not stable enough so that fluctuations appear in measurement results. This situation has created demands for SC light sources with much higher stability.

How the SC light source generates a supercontinuum spectrum.

SC light sources create high-brightness over a broad wavelength range by utilizing a nonlinear phenomenon in which the wavelength of ultrashort pulsed laser repeatedly output at very short time intervals, broadens when it travels through an optical fiber made of a nonlinear optical material.

The high stability of supercontinuum light source is achieved by high nonlinear optical fiber for controlling the nonlinear phenomenon that occurs in the nonlinear optical material. Moreover, the output conditions of the ultrashort pulsed laser and the length of the optical fiber are optimized to maximise stability – typically about 20 times higher than that of commercially available SC light sources, states Hamamatsu, in a technical paper, accompanying the new release.

It continues, “We also succeeded in cutting costs by minimizing the number of parts used, as well as extending life time by redesigning the ultrashort pulsed laser light source. Using our new SC light source allows accurate measurements with high repeatability when inspecting semiconductor device structures that are constantly shrinking in size due to the rapid pace of microminiaturization.

“This SC light source will also prove a valuable tool in other measurement applications using light and photonics technology such as OCT where it will help capture more detailed images. To respond to market needs, we will push ahead with plans to achieve longer life time, higher brightness, and a wider spectral range extending to longer wavelengths.”