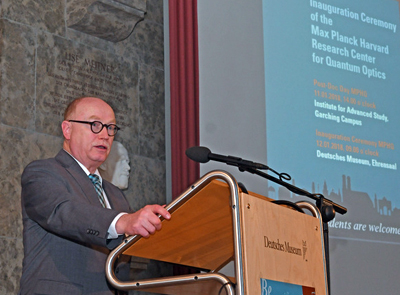 Martin Stratmann at the Inauguration ceremony on January 12th.

Roughly 100 years after the quantum nature of light and matter was discovered, quantum physics is experiencing a kind of revolution, say scientists from two venerable research centers on either side of the Atlantic. New techniques based on the controlled interaction of laser beams with matter are enabling the exploration the mysteries of nature and forming the basis for proposed quantum devices, such as quantum computers.

The scientists from two worldwide leading research institutions have announced a plan to strengthen their cooperation in quantum optics within the newly-established Max Planck Harvard Research Center for Quantum Optics (MPHQ).

“Harvard University, like the Max Planck Society, has an exceptionally strong tradition in quantum physics. Since groundbreaking innovations from the first generation of this field of research, such as laser technology, have already long played a significant role in shaping our everyday lives, the MPHQ facility is exactly the right format to enable us to jointly bring fresh impulses to this promising field,” said Martin Stratmann, President of the Max Planck Society, during the Center’s Inauguration last Friday, 12 January 2018, at the Deutsches Museum in Munich.

He added, "Today, quantum optics is a multidisciplinary field, combining, for example, concepts from condensed matter physics and quantum field theory. To some extent, both institutions have complementary expertise, which is now brought together in the new center." Research topics at MPHQ range from the study of exotic quantum matter phases, quantum computing – based on scalable quantum networks or quantum simulation – to quantum metrology and ultracold chemistry.

“The longstanding cooperation between the two institutions is being intensified by the new center,” said Gerhard Rempe from the Quantum Dynamics Division at MPQ, one the MPHQ’s co-directors. Besides Rempe’s division, the MPQ divisions Quantum Many-Body Systems of Immanuel Bloch, Theory of Ignacio Cirac, and the emeritus group Laser Spectroscopy of Theodor W. Hänsch, also participate in the new endeavour. Harvard University’s Department of Physics is contributing with the groups of John Doyle, Mikhail Lukin, Kang-Kuen Ni, and Eugene Demler.

At the inauguration ceremony, Immanuel Bloch said, “The new Max Planck Center brings together some of the worldwide leading teams in the field of quantum optics, allowing us to address some of the most outstanding questions in our field. In particular, we want to support early career researchers, enabling them to form a unique scientific network. To this end, exchange programs and regular schools on quantum science are implemented in the cooperation agreement of the MPHQ.”

Among the current collaborative projects is one on the study of quantum many-body systems. “Here, the techniques developed in the fields of quantum information theory and condensed matter physics at MPQ and Harvard are being combined to address new challenges and describe physical phenomena that could not be accessed so far,” said Ignacio Cirac.

Nobel laureate Theodor W. Hänsch is also enthusiastic about the new cooperation. He commented, “The Max Planck Harvard Research Center for Quantum Optics is creating synergies between research teams at both locations with complementary expertise and facilities. Our group, for instance, will participate with novel laser spectroscopy of atoms and molecules.”

This second Max Planck Center with Harvard has a planned duration of six years. And with it, the total number of Max Planck Centers worldwide is now 18. Both cooperation partners will contribute about €365,000 ($450,000) per year.