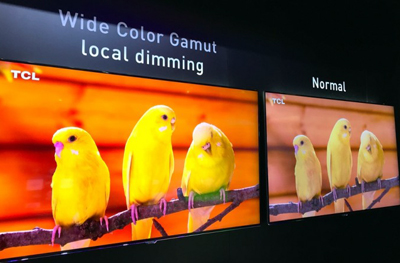 The difference in color quality created by Wide Color Gamut for HDR standards.

TV manufacturers are struggling to trigger replacement cycles, but Wide Color Gamut (WCG) and High Dynamic Range (HDR) – and their associated picture quality improvements – are the next growth drivers for the TV industry. So argues Eric Virey, Senior Market & Technology Analyst, LED, Sapphire & Displays at Yole Développement (Yole), which has just published a report analyzing how new screen technologies are impacting this market.

Various technologies are competing to deliver these features. In the short and mid-term, the best-positioned ones are OLED and the well-established, dominant, LCD technology supercharged with narrow-band phosphor LEDs or QD color converters in the backlight unit, the analyst company believes.

The report attempts to answer the questions: what is the status and benefits of QD technologies? And after QD-Vision’s demise, which are the companies that can meet the demands of the fast growing LCD market? Furthermore, how will the competitive landscape evolve, especially with OLED solutions?

Their most common implementation is as color conversion films, located in the LCD backlight unit. In this form, QDs are drop-in solutions that can be easily deployed on all sizes of displays without any process change or CapEx.

The report comments, “QDs therefore enable the LCD industry to boost the performance of its products without major investment. This contrasts with OLEDs, which require building multibillion-dollar dedicated fabs.”

However, QDs are not able to solve all of LCDs’ shortcomings. Mostly, LCDs still lag behind OLEDs in terms of response times, black levels and viewing angles. Also, LCDs cannot deliver pixel-level dimming, which is the strongest selling point for OLED displays, Yole argues.

Dr Eric Virey from Yole states, “In the near future, QDs could substitute for LCD color filters. Unlike films, this configuration requires some process changes in LCD manufacturing. However, it would double the display efficiency, further improve color gamut and provide viewing angles similar to OLED.

“In the longer term, EL-QD could deliver OLED-like characteristics and performance, with improved brightness and stability. QDs and related technologies will take advantage of OLED TV capacity constraints.”

LCD out – OLED in

LG Display is currently the only OLED TV panel manufacturer. The company has announced that it will stop investing in LCD and build two new OLED TV manufacturing lines in Korea and China, slated to start production in late 2019. 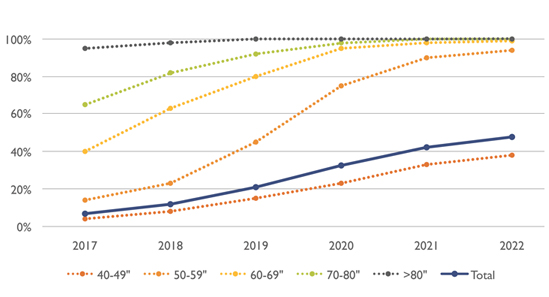 Cost and technology barriers to entry are high, and few other companies will be able to manufacture OLED TV panels in that timeframe. Unless OLED printing technologies progress fast enough to enable cost efficient manufacturing of large, full RGB displays, OLED TV adoption will therefore remain capacity-constrained to less than 12 million units per year until 2022.

Yole says that QDs “will take advantage of this window of opportunity to capture the lion’s share of the WCG and HDR TV market. Rapidly improving performance and decreasing cost is already enabling adoption to spread into mid-range, sub-US$1000 models opening a high volume markets still forbidden to OLED for cost and capacity reasons. Display makers will use QDs to keep extracting more value from existing LCD fab. For the long term, many are hedging their bets and looking at both RGB printed OLED and EL-QDs.”

In the mid-term however, QDCF configurations represent an attractive opportunity to close the gap with OLED in term of viewing angles and widen it in term of gamut and efficiency. QDCF however requires some LCD manufacturing process changes. Although moderate compared to a new OLED fab, not every LCD maker will want to commit the required CapEx or even develop the technology.

In the longer term, both OLED and QD-enhanced LCD could face competition from new, disruptive technologies such as the already mentioned electroluminescent QDs or even microLEDs, which could drive a potential paradigm shift, offering alternatives to OLED in self-emissive display technologies. Other technological innovations could also disrupt the QD market. For example, commercialization of a narrow-band green phosphor could eliminate the performance gap between phosphors and QD films and enable a more cost-effective solution.

A detailed description of Yole’s report is available on i-micronews.com.