A plethora of papers, products and presentations detailed the rapid progress in fiber-based networks.

The giant ECOC hashtag was a popular spot for "selfies".

In the accompanying exhibition – which was significantly larger than last year’s Düsseldorf expo – the impending 5G (“fifth generation”) wireless broadband technology, based on the IEEE 802.11ac standard was a common theme across the floor.

On higher speed optical networks (400G solutions were widely displayed) Brad Booth, President of Consortium for On-Board Optics, spoke on the importance of a developing a global standard to overcome what he sees as “current limitations of existing infrastructure to advance bandwidth growth beyond 400G.”

In a Market Focus conference there were also calls for the de-skilling of installation staff to help Europe meet its fiber installation targets. Emtelle’s International Business Development Director, Colin Kirkpatrick said that new approaches were required if the 2020 goal for Europe’s planned Digital Single Market is to be achieved.

The opening day also saw a significant product launch from ProLabs, which displayed its new “Green” transceivers. These devices use 30% less power than typical transceivers that support networks of up to 100G.

In another Market Focus talk, Ericsson’s Paolo Monti gave a presentation on the synergies required between fixed and mobile networks. Speakers from Source Photonics, FTTH Council Europe, Finisar and Hexatronic covered a range of topics related to fiber access. 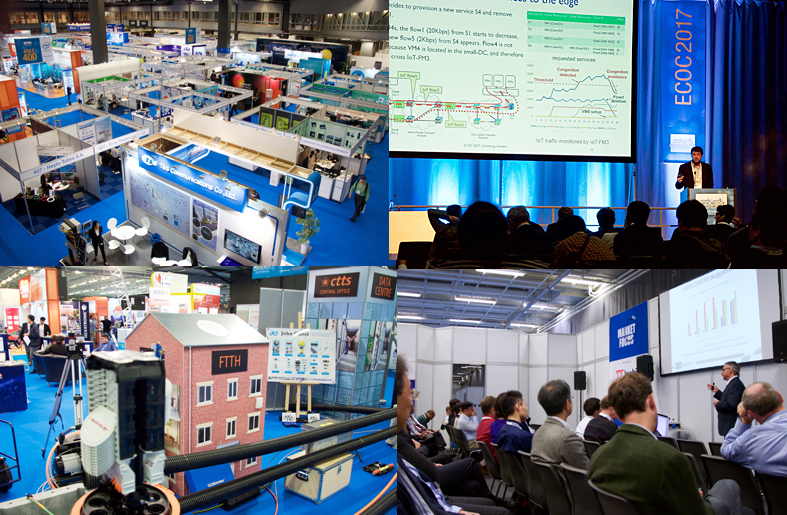 Fujikura launched a new range of fiber splicers commenting that it was especially appropriate to be here as Sweden is regarded as Europe’s leading market for ribbon splicing.

Finisar presented its QSFP28 eSWDM4 module, which transmits live data over 300m of OM4 multimode fiber displaying an error-free link using Forward Error Correction – something which it said “will be crucial in delivering cost-effective 100G solutions”.

A regular ECOC exhibition feature is the FTTx Center, which hosts dedicated talks and demonstrations. Sell-out sessions on passive optical networking and fiber splicing demonstrated the importance training will play in the expected mass deployment of fiber across Europe in the coming years. 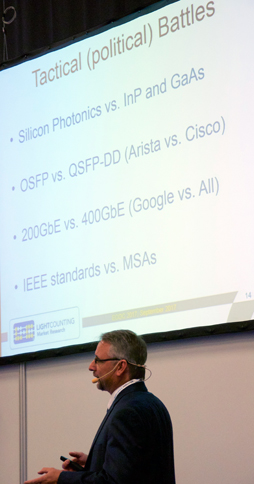 'Biggest show for a decade'

On day three, the conference continued with discussions on optical network agility, packet optical transport and fiber. The event organizer Nexus Media reported that 2017 was another successful year for the ECOC Exhibition, with more than 5,900 attendees visiting 325 exhibitors – the biggest show in more than a decade.

“ECOC is the biggest show in Europe as far as we are concerned,” said Ward Williams, CEO of ProLabs, which launched its company rebrand during the show. “The exhibition gives us the opportunity to show our current and potential customers what we do, as well as acting as a meeting point for the entire industry.”

Wednesday’s Market Focus wrapped up the series, with more than 3,000 attendees having attended at least one of the sessions. The day’s agenda opened with David Bianchi, of Cisco, discussing multi-layer and multi-vendor approaches to cloud scale transport networks, followed by Inphi’s Senior Director of Product Marketing Michael Furlong introducing PAM4 modulation to an interested crowd.

The final sessions of the week looked at photonic integration and digital silicon photonics, beginning with LightCounting’s Dr. Vladimir G. Kozlov providing an update on the silicon market (see photo). Sven Otte, CEO of Sicoya, followed with his presentation on how monolithic integration addresses the challenges data center will face in what he called “zettabyte era”, followed by speakers from II-VI Photonics and Neo Photonics.

The 2017 Market Focus was closed by Dr. Michael Lebby, CEO of Lightwave Logic, who reviewed the latest work on photonics roadmaps for 400Gbps and 800Gbps. Next year the itinerant event will take place in Rome; exhibition bookings have already started.