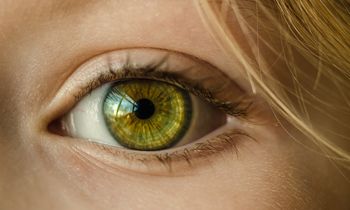 The human iris: a complex structure

The iris of the human eye can be affected by a number of medical conditions, and changes to its morphology provide an indication not just of disease in the local tissues but of broader systemic conditions as well.

Existing techniques for accurately imaging the structure of the iris include OCT and ultrasound, but the dynamic nature of the iris and natural movement of a patient's eye can affect the results they produce, and interfere with the generation of the 3D image information that clinicians would like.

A project at the University of Michigan has developed a possible solution, by using a plenoptic or light-field camera to image 3D iris patterns in a single photograph. The work was published in Biomedical Optics Express.

Plenoptic cameras are able to capture not just the intensity of incoming light but also the angle from which it arrives. A "4D" image can then be recreated from the data, which among other useful properties can be refocused after being taken, something impossible in a conventional photograph.

The theory behind light-field cameras has long-established roots, but the configuration conceived in 2005 and subsequently commercialized by Lytro placed a micro-lens array in front of a conventional image sensor, to record the directional information as well as color and intensity. Real-world applications of the technology are now increasingly attractive in sectors such as machine vision, where its ability to enhance the optical capabilities of robots could be of value.

At Michigan, the project team employed a camera from plenoptic suppliers Raytrix, and mounted it into a standard ophthalmology slit lamp. Human iris images were recorded at five frames per second, with an exposure time of 100 milliseconds, allowing a full sequence of 50 images for each eye to be generated in around ten seconds.

Early signs of melanoma
To test the system, it was first used to image the irides of healthy patients, exploiting the ability of plenoptic image data to be refocused in order to reveal the 3D topography of the iris and its characteristic fine structure of radial folds. Peaks and valleys with height differences of 20 to 80 microns were measured, according to the team's published paper.

The plenoptic platform may ultimately make its clinical impact by either monitoring the condition of patients suffering from iris melanoma - a tumor in the iris - or by helping to identify precursors to the condition before a tumor develops. In particular, clumps of pigment cells on the iris surface, called iris naevi, develop spontaneously and are usually benign, but are thought to be connected to the subsequent appearance of a tumor.

Plenoptic imaging of the region around an iris naevus in test subjects allowed the altered topography of the area to be accurately measured. The BOE paper notes that the relative heights of the peaks and valleys in the iris structure were different in the area of the iris naevus compared to the surroundings, presenting a relatively flat topography with small height differences of less than two microns.

Further work is now planned to enhance the platform's capabilities, including replacement of the slit lamp with a brighter short-pulsed illumination in order to reduce the exposure time, along with modifications to the computational algorithm used to generate the 3D data. But the value of a simple micro-plenoptic system designed to measure the 3D human iris topography has already become clear to the researchers.

"As iris naevi is the precursor of iris tumor, they need to be monitored frequently, and this imaging technique offers a simple promising way to realize this," the team commented. "The micro-plenoptic imaging system has great potential to be utilized for iris disease diagnosis and continuing, simple monitoring."