Telescope enthusiast and optics educationalist will serve as society’s president in 2020. 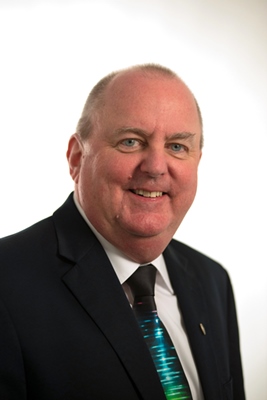 SPIE Fellow John Greivenkamp, professor of optical science and ophthalmology at the College of Optical Sciences, University of Arizona, has been elected to the society’s presidential chain.

Announced by current SPIE president Glenn Boreman during the society's annual general meeting, which is taking place in San Diego this week alongside the Optics+Photonics conference, the result will see Greivenkamp serve as vice president next year, president-elect in 2019, and president in 2020.

Greivenkamp is the series editor of SPIE’s popular “field guide” series of publications, and has taught a course on optical systems design since 2005. He has also served on numerous SPIE committees, and stood on the society’s board of directors from 1997 through 2000, and again from 2012 through 2014.

Kodak researcher
A graduate in physics and mathematics from Thomas More College, Greivenkamp completed his PhD in optical sciences at the University of Arizona in 1980.

After more than a decade working as a researcher at Eastman Kodak, he returned to Arizona to join the Optical Sciences Center there in 1992, where he has worked ever since.

In 2017 Greivenkamp collected the SPIE Educator Award for his dedication to both formal and informal optics education and, in SPIE’s words, “his passion for transferring his knowledge to the next generation of engineers and inspiring students of all descriptions to an appreciation of science”.

While his technical interests stretch from interferometry and optical testing of aspheric surfaces, to ophthalmic and visual optics, ophthalmic instrumentation and measurements, optical system design, optical metrology systems, optical fabrication, and optics of electronic imaging systems, Greivenkamp is also said to have a passion for telescopes.

That passion led him to found the Museum of Optics at Arizona's College of Optical Sciences, which features a collection of antique and historic telescopes, microscopes, binoculars, lenses and cameras, some dating back to the 18th century.

Presidential chain
Following Boreman’s stint this year, the University of Chicago medical physics and radiology professor Maryellen Giger will serve as SPIE president in 2018, before Jim Oschmann from Ball Aerospace takes over for 2019.

In other SPIE results, former Newport executive Gary Spiegel was elected to serve as the society’s secretary and treasurer for another year, while four newly elected society directors will serve three-year terms for 2018-2020.

• SPIE’s Optics+Photonics event continues through August 10 at the San Diego Convention Center. The society is the publisher of optics.org.