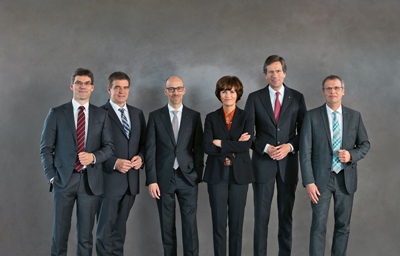 Laser and machine tool giant Trumpf has posted an 11 per cent rise in annual sales to €3.1 billion, with orders rising even faster thanks in part to the requirements of extreme ultraviolet (EUV) lithography equipment.

In its preliminary figures for the year ending June 2017, Trumpf reported that its sales to the Netherlands - home to key lithography equipment provider ASML – rose by 55 per cent as the first generation of EUV tools shipped to chip manufacturers.

All of those tools rely on extremely high-power carbon dioxide lasers, which generate a plasma when the pulses of 10.6 µm light they emit hit tiny droplets of tin in the EUV source chamber. The excited plasma produces broadband light, from which the emission at 13.5 nm is selected to pattern tiny features on silicon wafers.

Trumpf also reported strong rises in laser sales to Italy (up 34 per cent), while South Korean customers accounted for €209 million in revenues, up 57 per cent year-on-year.

Targets exceeded
CEO Nicola Leibinger-Kammüller attributed the positive result to a strong global economy and – to some extent – currency effects, saying in a company statement: “In many markets, we exceeded our targets, with an equal contribution from all our products. But we know that the current investment climate has been influenced by external factors such as the euro exchange rate and raw materials prices.”

Trumpf, which now employs 12,000 people, is also reaping the benefits of some major internal investment in recent years, with Leibinger-Kammüller pointing to expansions at production and sales facilities in Warsaw, Poland, and Neukirch, Germany, as well as the new €35 million logistics center at Trumpf headquarters in Ditzingen.

The logistics center is set to be unveiled to the public on October 19, while Trumpf has also built a €13 million “Industry 4.0” demonstration facility in Chicago, which will be opened in September.

Political matters
Commenting on the perceived friction between its respective political leaders, Leibinger-Kammüller added: “Clearly there are political differences between Germany and the US at the moment, and that makes it all the more important that we give our American customers a clear signal that we see the US as one of the main markets for digital production.”

But the CEO suggested that so far there has been hardly any impact so far on business in Europe as a result of the UK’s vote to leave the European Union. “In many cases, political uncertainties have simply not affected the economic situation,” she said. “It’s clear that customers and suppliers have learned to respond to the increased volatility with a high degree of flexibility.”

The strong results come as Trumpf reshuffles its management and organizational structure, with an expanded board of directors and some new responsibilities for key figures at the family-controlled firm.

In April Trumpf announced that Peter Leibinger, the company’s long-time laser divisional head, would move from an operational role to instead head up business development for key new technology areas including EUV lithography and additive manufacturing.

Meanwhile Mathias Kammüller has shifted from heading up Trumpf’s machine tools division to become the firm’s new "chief digital officer", while new directors Heinz-Jürgen Prokop and Christian Schmitz joined the management board at the start of July.

As is normal, Trumpf is set to release its full financial results, including a breakdown of laser sales, in October.