US defense contractor hooks up with Canada-based Metamaterial Technologies on $5.6M project. 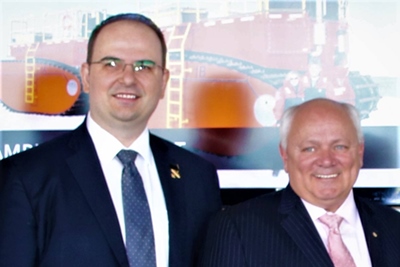 Under the $5.6 million agreement, MTI will develop its new “metaSOLAR” product for potential deployment on aircraft.

The agreement is part of a wider investment in four small Canadian businesses by Lockheed, and a direct result of Canada’s “Industrial and Technological Benefits” policy that requires defense contractors to make investments in the country equal to the value of any contracts that they win.

No tracker required
MTI specializes in optics and metamaterials, and is already working with Airbus to develop an optical film called “metaAIR”, said to be capable of blocking laser attacks on aircraft by filtering out the laser wavelengths typically used by high-power laser pointers.

Just a couple of months ago the Halifax, Nova Scotia, company announced an $8.3 million round of series A venture financing, while last year’s acquisition of optical lithography equipment specialist Rolith gave it access to key production tools.

Commenting on the Lockheed deal, MTI’s CEO George Palikaras said: “This agreement will allow us to accelerate the development of metaSOLAR as we aim to enter the solar market by providing advanced photovoltaic technology to the aerospace and defense industry.”

He added: “metaSOLAR will be ideal for harvesting energy in the transportation industry beyond aviation.”

According to MTI, the patented solar technology has been engineered to collect, trap and absorb light from all directions at wide angles, significantly improving efficiency and removing any need to follow the sun with expensive tracker systems.

MTI adds that metaSOLAR incorporates its transparent conductive film material called “Nanoweb”. The metal mesh can be printed lithographically onto any surface using the Rolith equipment, claims the firm, enabling it to manufacture functional materials in a variety of geometries.

According to the Canadian startup, the thin films are able to increase the overall output of solar cells. It sees future applications for the ultra-lightweight material in solar-powered aircraft and consumer electronics products, among other things.

The technology is engineered to trap light from oblique angles that would otherwise be reflected by conventional solar cells.

‘Disruptive’ tech
Quoted in an MTI release about the Lockheed project, the California Institute of Technology (Caltech) photonics and metamaterials researcher Harry Atwater said: “Metamaterials are in essence the materials of the future. MTI is pioneering large-scale affordable nanofabrication technology that can push the boundaries for crystalline silicon solar efficiency and create very thin form factors for solar cells.”

Commenting on the wider investment by Lockheed made under the ITB rules, Canada’s minster of innovation, science and economic development Navdeep Bains said: “Under this policy, Lockheed Martin is supporting research and technological breakthroughs that will help these firms grow and become part of supply chains here and abroad.

“We are using investments in the Canadian Armed Forces and Coast Guard to drive the kind of innovation that will grow small businesses and boost our economy as a whole.”