Revenue for quarter was $256 million, a net loss of $56 million, China business slowed, but outlook is better, says firm. 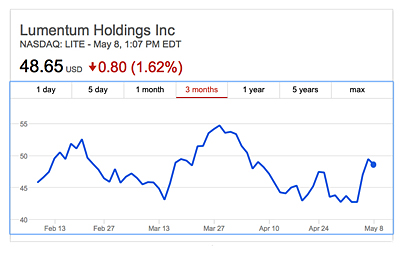 Ups and downs: Lumentum's Q3 sales made for a mixed share price picture.

"During the third quarter we made solid progress on our strategic goals in each of our markets," said Alan Lowe, president and CEO. "Our revenue from 100G QSFP28 transceivers targeting hyperscale datacenter applications picked up materially, we shipped record levels of next-generation TrueFlex ROADMs, our commercial lasers business returned to growth, and we made substantial progress on 3D sensing for mobile devices applications."

"Late in the third quarter we saw demand from China slow significantly, and this softness persisted through April. Despite this near-term softness, we remain optimistic about our longer-term outlook. Demand continues to grow for bandwidth across the world’s datacenters and communications networks. Manufacturers are increasingly adopting advanced laser-based techniques. And, leaders in next generation consumer electronics, as well as the automotive industry, are looking to 3D sensing to enable new applications," concluded Lowe.

For the fiscal fourth quarter of 2017, Lumentum said it expects net revenue to be in the range of $220 million to $235 million, non-GAAP operating margin to be 9.0% to 11.0%, and non-GAAP diluted earnings per share to be $0.30 to $0.40 per share, based on approximately 63.7 million shares outstanding on a fully diluted basis.