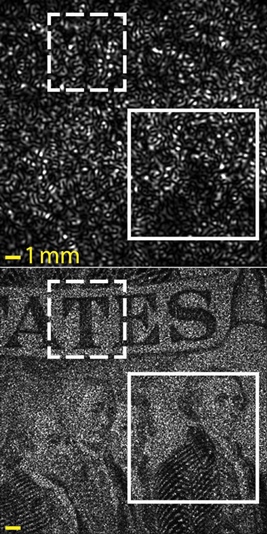 Engineers at Rice and Northwestern universities in the US say that they have built a prototype lens-free camera capable of high-resolution imaging in the visible range.

Similar in principle to the resolution-boosting approach employed in synthetic aperture radar (SAR), the camera is able to capture micron-level detail from the relatively long stand-off distance of a meter, using speckle patterns generated by an illuminating laser.

$2 bill detail
Rice professor Ashok Veeraraghavan, one of the authors of an open-access paper on the subject just published in the journal Science Advances, believes that although the current prototype only works with coherent illumination, the work represents an initial step towards a “synthetic aperture visible imaging” (SAVI) camera array that could be used outside of a laser lab.

“Today, the technology can be applied only to coherent light,” he said in a Rice release. “That means you cannot apply these techniques to take pictures outdoors and improve resolution for sunlit images - as yet. Our hope is that one day, maybe a decade from now, we will have that ability.”

The research team have demonstrated the resolving power of the technique by capturing minute details of a $2 bill from a stand-off distance of one meter.

In their paper, they claim a six-fold improvement to resolution, compared with standard imaging techniques. In theory, the approach could be used in surveillance and authentication applications, for example to capture biometric details from distance.

“The problem we’re solving is that no matter what wavelength of light you use, the resolution of the image – the smallest feature you can resolve in a scene – depends upon this fundamental quantity called the diffraction limit, which scales linearly with the size of your aperture,” Veeraraghavan said.

“With a traditional camera, the larger the physical size of the aperture, the better the resolution,” he said. “If you want an aperture that’s half a foot, you may need 30 glass surfaces to remove aberrations and create a focused spot. This makes your lens very big and bulky.”

Ptychography principle
Key to the “synthetic aperture” approach is to do away with the conventional optics, and employ a technique known as Fourier ptychography (FP). In principle, that could mean replacing bulky and expensive telephoto lenses in a conventional imaging setup with an array of plastic lenses and sensors – and an orders-of-magnitude cost reduction.

While known for some time, ptychography is now emerging as a practical field of imaging – thanks in large part to recent advances in computer processing power that have made handling the complex algorithmic reconstruction of such images possible with standard equipment.

Among its exponents are the venture-backed UK company Phase Focus, which has applied the technology to a variety of scientific and medical imaging applications via its proprietary “virtual lens”.

In the US, the Caltech spin-out Clearbridge BioPhotonics says that it will “revolutionize clinical diagnostics and biological research” by using Fourier ptychographic microscopy to create super-resolution images. 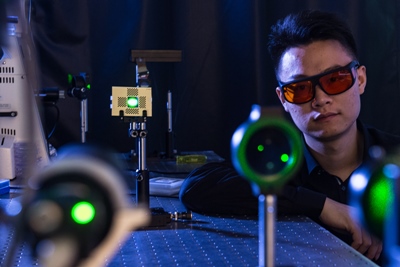 Turbulence issue
The Rice and Northwestern scientists are looking to develop similar capability beyond the microscope environment, but admit that a number of challenges remain before that will be possible.

One is that so far they have only considered diffraction in terms of the limiting factors in spatial resolution loss. “Atmospheric turbulence, long the bane of astronomers, will also affect image measurements made over large distances,” they write in their paper conclusions.

“There is some hope that the redundancy in the measurements for FP can help mitigate the effects of turbulence, just as aberrations and imperfections in the pupil function can be modeled and corrected, but significant research will be needed before dynamic effects can be incorporated into the model.”

Nevertheless, the team believes that the current work lays “important groundwork” toward achieving the practical implementation of FP imaging in the visible domain.