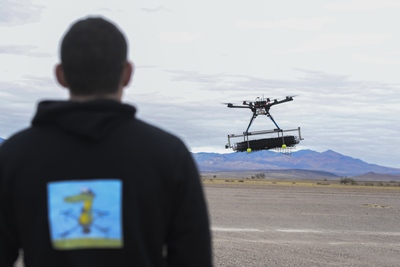 by Ford Burkhart
At last week’s SPIE Defense + Commercial Sensing (DCS) event, miniature and mobile optical sensor applications for commercial drones were high up the agenda, with an industry panel session on the topic boasting a high-profile line-up of polished speakers.

In the future, their insights may well be aimed at warfighting and other defense and security challenges. And panel moderator Joseph Montemarano, from Princeton University, reckoned those markets that today are focused on methane sensing and gas pipelines will still be listening.

Six experts took on the challenges of drone-based mobile spectroscopy at the DCS panel, which took place April 12 at the Anaheim Convention Center in California.

Take the sensor to the threat
Timothy Day, co-founder of Daylight Solutions – the quantum cascade laser (QCL) specialist recently acquired by giant Italian defense contractor Leonardo - summed it up. When you’re far away, everything’s harder to detect. The solution: “Bring the sensor to the threat,” Day said, referring to sensing chemicals with QCL-based devices.

His emphasis was on long-standoff solutions. Miniaturization offers “a tremendous opportunity” to combine drone capabilities with QCL packages that are “light, compact, efficient, fast, and able to sense multiple threats.”

The key to it all is the “chemical fingerprint” of the mid-infrared spectrum. One application is to spot improvised explosive devices, with a detector package weighing less than a kilogram able to span the 3-12 µm regime for multiple gases.

With a drone carrying such integrated mini platforms, Day said that the sensor can indeed be taken to the threat.

In a war zone, that could mean mapping a threat at a bridge, from a suitable stand-off distance. In industry, it could mean getting to a toxic waste leak, quickly verifying the chemicals involved, and the ability to enhance signal-to-noise by getting up close.

Partnering with the University of California Merced, they mounted small tunable lasers on a quad-copter drone, demonstrating sufficiently high sensitivity to document a tiny leak of natural gas in a desert, in a 70 meter circle.

“Imagine that in your neighborhood or along a pipeline,” he said, “and you can find a gas plume at considerable distances. We can get ten parts-per-billion readings.”

In the future, they will be able to detail an emission flux rate. “That’s the work we are doing now, in a ‘fake neighborhood.’ We fly the quad-copter back and forth many times.” Within just a few minutes they have a picture, and start to “see” the methane plume, at parts-per-billion sensitivity.

At a wellhead, the leakage can be 2-10 percent of total production. “Having 24-7 continuous monitoring can indicate maintenance needs. It’s just efficient business operations,” said Green.

He showed a sensing chip able to predict and quantify the location and flux of methane emissions by trace-gas spectroscopy. An on-chip reference cell provides built-in self-calibration and long-term sensor accuracy. “We’re making an ecosystem for producing this sensor for $250 per unit,” he claimed, “using less than one watt of total power consumption.”

“Miniaturization is a main driver for chip-based sensors,” he added. Green’s team starts with vendor-supplied components and adds a substrate to allow placement. “By the end of year, we hope to have a full prototype together, with a 30 cm long path for the silicon waveguide sensor,” said the researcher.

Michael Frish, of Physical Sciences, Inc. (PSI) in Andover, Massachusetts, echoed Green’s thoughts on methane and the millions of miles of natural gas pipelines in the US. Leakage, he said, “is almost a bigger problem than CO2.”

Flux measurements
In nearby Boston, where such episodes are common, his team set out to help prioritize leaks for repair. “Using near-infrared devices, we measured concentration at a leak site. That depends on the wind,” he said. Currently the technology is based around a tunable diode laser detector, with plans to develop more sophisticated technology able to measure gas flux across a plume under way.

In Las Vegas, the PSI team cruised the city with a “FluxMobile” spinning device on top of a van. It was able to give an operator enough flux information to tell whether a leak was small, medium or large - and to yield an initial assessment of the repair needs.

Princeton’s Mark Zondlo, a professor in civil and environmental engineering, detailed the challenges involved in packing such high-tech systems into the small UAV payload, noting the added complications of engines, vibration, and updraft from rotors. “You need accuracy and precision, but we don’t have the full tools available,” he said.

For example to assess flux, you must measure winds. Even with a perfect sensor, you will have UAV turbulence, Zondlo said. In his words: “Very challenging.”

Since 2011, Zondlo’s team has been working on the best ways to mount a sensor on board a ‘copter drone. “These plumes are small, and you fly fast, so you need fast-response measurements,” he said. In work at Cape May in New Jersey they were able to produce six high-precision profiles in 45 minutes.

GE, he said, has invested in Sarcos, and its “Snake Robotic Platform” for maintenance and repair. Taylor-Smith showed a video of a small “snake” sensor using magnets to climb up on the surface of a metal natural gas tank to the top, as an example of human-controlled and autonomous sensors.

GE, he said, was also interested in new industrial wearable sensors, along the lines of Google Glass and Microsoft’s HoloLens.

He showed video of a worker carrying out a complex manufacturing task, twice - but once with help of an industrial wearable sensor displaying instructions from software firm Skylight. Using the sensor and without having to look up instructions manually, the worker showed a 30 per cent increase in efficiency.

In response to questions at the panel session, Taylor-Smith said that in the next 5-10 years markets will be looking for improved training and wearables in industry, especially for field services.

A key near-term application, he said, will bridge field and headquarters workers using what he called wearable “see what I see” devices. As the field worker looks around, the headquarters staff sees his exact view in real time, a technology likely to find uses in energy utilities.