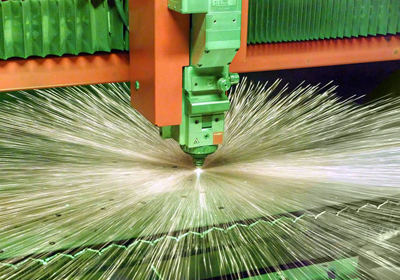 In further evidence that fiber laser technology is taking over from the CO2 laser power source when cutting sheet metal and plate into components of simple or complex shape, David Larcombe, managing director of Bystronic UK, a division of the Swiss-headquartered company, has revealed that since August 2015 the company has not sold a single CO2 laser cutting machine in his territory of Britain and Ireland.

In contrast, fiber laser-based cutting machines have sold well. In November and December 2016 alone, orders for 14 were taken, half of which were for high-power models launched at the EuroBlech show in Hannover, Germany, in October 2016. Two of the seven high-power machines were 8 kW models, with the remainder equipped with the 10 kW fiber laser sources, which Bystronic says are the most powerful currently available on the UK market.

Larcombe commented, “Of the seven lower-power fiber laser machines that Bystronic sold during the last two months of 2016, five were specified at 6 kW, while the other two were rated at 4 kW and 2 kW. There is still a demand for competitively-priced, relatively low-powered fiber models from manufacturers processing only thinner gauge materials.” 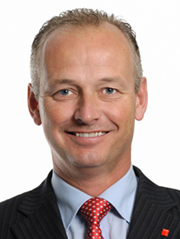 He added, “The 10 kW source has the ability to cut mid-range thickness materials much faster. For example, mild and stainless steels in the 3 mm to 6 mm thickness range can be profiled up to three times faster than with a 6 kW fibre laser, which provides a massive boost to productivity.”

Sales of laser materials processing systems up 6.8% in 2016

The report states, the global market for laser systems for materials processing increased by 6.8% in 2016 and reached the new record volume of $12.6 billion. The increase was mainly due to China where demand surged by nearly 20%. The manufacturing industry in the country continued to invest heavily into laser-based equipment despite the deteriorated economic environment.

Laser macro processing systems, used for cutting, welding, marking, and additive manufacturing, account for 75% of the total market volume of $ 12.6 billion. The market segment increased by 4.5% last year and outpaced the machine tool market which contracted by 3% according to the German Machine Tool Manufacturers Association (VDW).

The market for laser systems for microelectronics processing expanded by 15% in 2016 mainly due to the increased use of laser processes for the manufacturing of mobile electronic devices and their components such as displays and semiconductors. 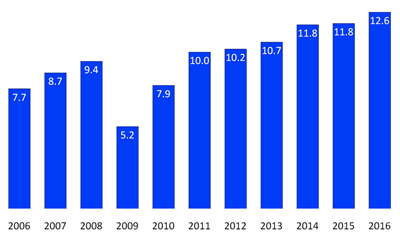 On the up: Global market for laser systems and materials processing ($ billions).

The global market for laser sources for materials processing accounted for $ 3.3 billion in 2016, up 5.4% versus the previous year. Fiber lasers now hold a 40% market share, ahead of gas lasers, represented by CO2 and excimer lasers (35%), and bulk solid state and diode lasers (25%).

In general agreement with Bystronic’s local observations, Optech’s director Arnold Meyer commented, “The demand for fiber lasers grew by 15% last year to $1.3 billion. The market volume for bulk solid state lasers grew in the ultrashort-pulsed segment while it contracted in the segment of longer-pulsed products.

“Fiber lasers continued to take away market share from high-power CO2 lasers as well as bulk solid state lasers. In the meantime, CO2 lasers have lost most of their market share in high-power cutting and welding, and their major applications now are marking and the processing of non-metals,” he said.