Projected guide lines on the floor in front of patient achieve clear reduction in symptoms. 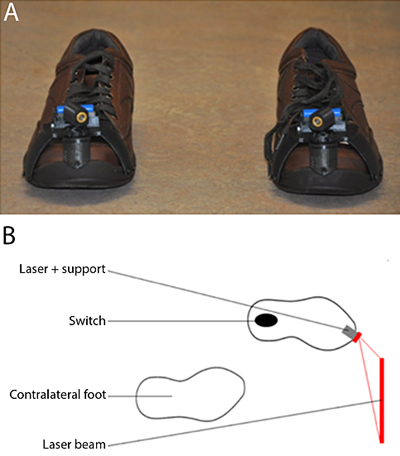 'Laser shoes' A. design and B. principle of operation.

Freezing of gait, an absence of forward progression of the feet despite the intention to walk, is a debilitating symptom of Parkinson's disease. But now, newly devised "laser shoes" that project a line on the floor to the rhythm of the footsteps help trigger the person to walk confidently.

The shoes benefit the wearer significantly, according to research by the University of Twente and Radboud University Medical Center, published in Neurology, the scientific journal of the American Academy of Neurology.

Walking problems are common and disabling in people affected by Parkinson’s disease. In particular, freezing of gait is a severe symptom which generally develops in more advanced stages. It can persist for periods of seconds to minutes and is generally triggered by the stress of an unfamiliar environment or when medication wears off. Because the foot remains glued to the floor but the upper body continues moving forward, it can cause the person to lose balance and fall.

Parkinson’s patients have been found to experience a unique phenomenon. By consciously looking at objects on the floor, such as the lines from a Zebra Crossing (“visual cues”), and stepping over them, they are able to overcome their mental blockages during walking. This activates other circuits in the brain, hereby releasing the blockages and allowing the person to continue walking comfortably.

The development team say this is why patients often make use of floor tiles at home. With the laser shoes, these useful visual cues can be continuously applied in everyday life, to walk better and more safely. The principle behind the laser shoes is simple: upon foot contact, the left shoe projects a line on the floor in front of the right foot. The patient steps over or towards the line, which activates the laser on the right shoe, and so on. 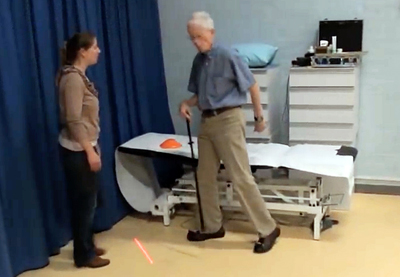 Light on his feet: “Freezing” episodes were reduced by 46% with the shoes.

The latest research study has shown a beneficial effect in a large group of patients. The number of “freezing” episodes was reduced by 46% with the use of the shoes. The duration of these episodes was also divided by two. Both effects were strongest in patients while they had not taken their medication yet. This is typically when patients experience the most problems with walking. But an improvement was also seen after the patients had been taking their medication.

"Our tests were administered in a controlled lab setting with and without medication," commented researcher Murielle Ferraye. " Further research in their everyday environment is necessary. We plan on testing this using laser shoes that in the meantime came on the market."

Of the nineteen patients who tested the shoes, the majority would be happy to use them. The patients did not seem to mind that the laser was activated for each single step. "Ideally, the laser should only be activated once the blockage is detected, but we're not quite there yet," said Ferraye. "Freezing is a very complex phenomenon."

Murielle Ferraye, who developed the laser shoes, conducted her study at the Donders Institute at Radboud university medical center and the MIRA Institute for Biomedical Technology and Technological Medicine at the University of Twente.

The following videos show a Parkinson’s patient walking without and with the laser shoes activated, showing the improvement in confidence and ambulation.