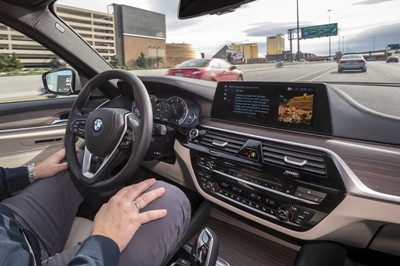 Guardian Optical Technologies (Guardian OT), a startup developer of optical sensors said to be capable of monitoring the heartbeat of each of the individual occupants inside a car, says it is ready to launch the technology after raising $5.1 million in Series A venture funding.

Supported by venture capital outfits Maniv Mobility and the Mirai Creation Fund, the Tel Aviv, Israel, firm says it will use the cash to accelerate and expand the technological development of a sensor combining video image recognition, depth-mapping, and motion detection.

Heartbeat sensing
Said to protect drivers and passengers by scanning and tracking occupants and objects anywhere inside a vehicle, the technology works in tandem with seatbelt tension sensors, airbags, pressure sensors and other built-in safety systems to detect tiny movements including – remarkably – the heartbeat of each vehicle occupant.

“Developed with the first technology to detect micro-vibrations using low-cost, automotive-grade components, the sensor can also distinguish between people and objects,” stated Guardian OT. “It can also detect the presence of objects without a direct line of sight, thanks to its micrometer sensitivity.”

Despite the apparent complexity and sensitivity, the company reckons that incorporating the sensor will actually make vehicles cheaper. It claimed: “A conservative estimate puts the savings at $20 per car, which for some auto manufacturers would translate to a $200 million saving per year.”

The savings arise because the new technology uses auto-grade, off-the-shelf components to eliminate the need to install multiple sensors throughout the car, thus reducing the total number of components needed.

Guardian OT is one of a growing band of Israeli tech startups targeting the automotive sector, and the future market for self-driving vehicles. Others include the lidar technology developers Innoviz – backed by parts giant Delphi - and Oryx Vision, another to attract funding from Maniv Mobility. The potential pay-off looks clear enough: earlier this year Intel acquired Mobileye, which had developed camera-based driver assistance technologies, for a cool $15 billion.

“[Guardian OT] has designed a forward-looking system that will transition seamlessly to support future advances in the automotive industry, particularly in autonomous vehicles,” says the startup. “In addition to a unique optical set-up, the solution also employs machine learning, with data analysis of real-time, comprehensive ‘big data’ collected on vehicle occupancy, along with image analysis of the sensor’s video feed.”

No line of sight needed
According to the company’s web site, the optical sensors use a patent-pending technology to detect the presence of humans even where there is no direct line of sight.

The depth sensor is said to detect the motions of the various objects within a given scene, before a proprietary algorithm classifies the typical motions of humans, animals and objects.

“Since our sensor detects the slightest motions, it provides segmentation with an accuracy and robustness which is unparalleled by any other technology today,” it claims.

CEO Gil Dotan, the entrepreneur who co-founded Guardian OT in 2014, said in a company release: “In the past two years, car manufacturers have marked Israel as a prime source of advanced technologies. For our part, Guardian Optical Technologies enables manufacturers to understand the reality inside the vehicle, in depth.

“Our vision is to create the ultimate in-vehicle sensing platform, enabling manufacturers to be more aware of passengers so that over time the travel experience will be improved, and the road will become a safer place for us all.”

Maniv Mobility managing partner Michael Granoff added: “Guardian Optical Technologies has developed a sophisticated response to the complexities of the automotive world today. And beyond that, it has developed a solution that is forward-looking and adaptable enough to meet future needs within the industry - especially the needs of autonomous cars.”

The deal is also said to represent the first time that the Japan-based Mirai Creation Fund, whose backers include Toyota, has invested in an Israeli company. “Our mission is to support innovative companies that are well-positioned to grow into the future and lead the way for decades to come,” said Shuhei Abe, the group CEO of SPARX, which operates the fund.