Confidence high as Apple, Samsung and others launch flagship devices. 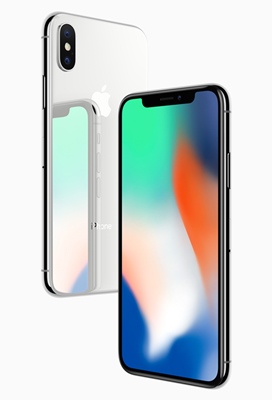 Organic LED (OLED) materials developer Universal Display Corporation (UDC) has increased its sales expectations for the year, as the technology finds its way into a growing number of high-profile consumer electronics products.

The booming market, which UDC says is still in its infancy, has enabled the Ewing, New Jersey, firm to rack up pre-tax profits of $90.7 million so far this year, compared with $33.2 million at this point in 2016.

CEO Steve Abramson told an investor conference call: “The adoption of OLEDs continues to expand and is fueling [an] exciting multi-year OLED capital expenditure growth cycle, in which we are in the early stages.”

OLED TV investment
Support for that assertion arrived last week in the form of a prediction by analyst company IHS Markit that global OLED panel production would more than quadruple in the next five years, to reach 50 million in 2022.

That figure relates mostly to smaller phone-sized panels, and larger OLED TV panels have historically been much more difficult and expensive to produce than LCD equivalents. But the situation appears to be changing rapidly. Jimmy Kim, IHS Markit’s principal researcher for the displays sector, says that driving the anticipated expansion is a substantial drop in OLED TV panel production cost.

According to his analysis, the average cost of making an ultra-high-definition 55-inch OLED panel stood at $582 in mid-2017 – reckoned to be a 55 per cent drop in just over two years since the technology was launched. The cost is expected to decline sharply, and reach $242 by 2021.

That will be largely thanks to the efforts of LG Display, the sole supplier of OLED panels to TV makers. Abramson said that September’s giant “IFA 2017” consumer electronics trade fair in Berlin saw no fewer than 13 different OEMs showcasing OLED TVs – all featuring LG Display panels.

And within the past fortnight, LG Display has revealed plans for a giant, multi-year investment in OLED technology for both smart phone and TV applications. That is expected to see OLED TV panel shipments from the Korean electronics giant ramp from 1.7 million this year to 6.5 million by the end of the decade.

Also expanding is China’s BOE Technology, while compatriot Everdisplay – with whom UDC recently signed a customer agreement – is investing some $4 billion in its new “Gen-6” OLED fab.

Auto adoption
Looking beyond the phone and TV sectors, Abramson said that Japan’s Pioneer had now developed “bendable” OLED lighting for deployment in cars, with expectations of full commercialization in 2020.

Sticking with the auto sector, the CEO added that Mercedes-Benz had recently become the third German car maker to adopt OLED lighting, with its tail-lights following similar designs by Audi and BMW. 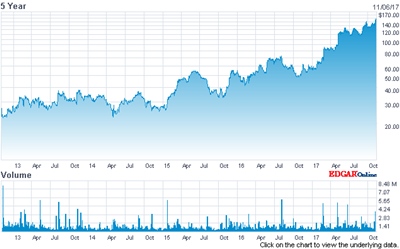 With the growth in demand all of that activity entails, UDC has now completed a $15 million investment designed to double production capability at manufacturing partner PPG’s facility in Ohio.

“OLEDs are fast becoming a requirement for the best consumer electronic products around the world,” Abramson told his investor call, while the company has increased its sales forecast for the year to between $310 million and $320 million.

That represents a raise of just over 10 per cent on prior expectations, and helped send UDC’s stock price up by a similar degree, to reach an all-time high on the Nasdaq stock exchange.

Trading at around $161 since the latest results were announced, UDC currently commands a market valuation of just over $7.5 billion and a remarkable price-to-earnings ratio of nearly 100.