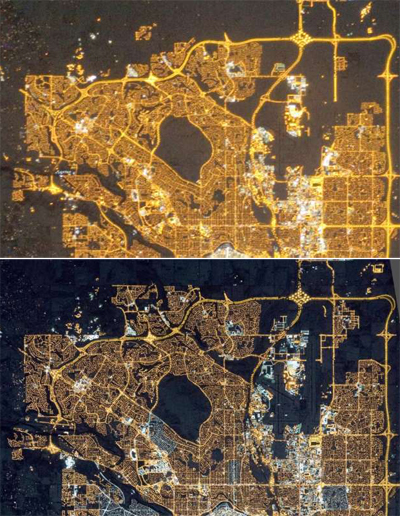 The mushrooming popularity of LED lights is driving an increase in light pollution worldwide, with significant negative consequences for human and animal health, researchers said Wednesday. These are some of the key conclusions of a paper just published in Science Advances.

The thinking of the international group of researchers, led by Luis Guanter of GFZ, the German Research Centre for Geosciences, in Potsdam, is that although LED lights are more efficient requiring far less electricity to provide the same amount of light, people tend to install more and more lights in a behavior called the "rebound effect".

The conclusions are based on satellite data showing that nights on Earth are getting brighter, and that the area of artificially lit outdoor surfaces grew at a rate of 2.2 percent per year between 2012 and 2016.

This can be a problem because nighttime lights – especially the modern blue-white types that more accuraley simulate natural daylight than older orange neon lamps – can disrupt our body clocks and raise the risks of cancer, diabetes and depression. Such blue light is also emitted by the screens of portable electronic devices, known to interfere with sleep.

Chris Kyba, a physicist at the GFZ , explained how cheaper, whiter LEDs have led to increased usage, “People keep installing more and more lights. We'll light something that we didn't light before, like a bicycle path though a park or a section of highway leading outside of town that in the past wasn't lit," he said. “So all of those new uses of light offset, to some extent, the energy-cost savings."

The study was based on the first-ever radiometer designed especially for nightlights, called the Visible/Infrared Imager Radiometer Suite (VIIRS). This device is mounted on the a National Oceanic and Atmospheric Administration satellite named Suomi NPP, which has been orbiting Earth since October 2011.

Researchers analyzed only nighttime lights during the months of October, to avoid any increase from holiday lights. With few exceptions, growth in lighting occurred throughout South America, Africa, and Asia, the report concluded. Declines in lighting were rare, but were noticeable in war-affected countries such as Syria and Yemen.

The researchers also noted the data was likely to be an underestimate, because the VIIRS cannot collect the blue wavelengths that are transmitted by many LED lights. Co-author of the study, Franz Holker, an ecologist at the Leibniz Institute for Freshwater Ecology and Fisheries, in Berlin, said the data reveal "quite a critical problem."

He added, "Many people are using light at night without really thinking about the costs. Seeing the big picture from above, completely changed how I use light at night."