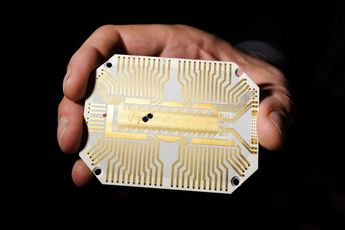 The European Commission's Quantum Technologies (QT) Flagship effort was announced in May 2016, a large-scale €1 billion initiative created in recognition of the transformative advances promised by the manipulation of quantum properties.

Developments in QT are expected to drastically impact computing power, communications and sensing, perhaps ultimately leading to a web of devices interconnected by quantum effects such as entanglement and coherence.

The QT Flagship's final report was recently published, outlining its intentions and echoing comments made earlier this year at LASER Munich about the need for a concerted European effort in the field, to ensure that Europe remains competitive.

"In the past, Europe has missed the opportunity to capitalize on major technology trends, and this could well happen again if Europe does not take decisive action now," stated the report. "Developing Europe’s capabilities in QT will help to create lucrative knowledge-based start-ups, foster further growth of SMEs and industry and thus lead to long-term economic, scientific and societal benefits."

As set out in the final report, the QT Flagship program is to be structured in five domains, each of which will be reflected in the calls for proposals.

• Communication, to guarantee secure data transmission and long-term security for the information society by using quantum resources for communication protocols;
• Computation, to solve problems beyond the reach of current or conceivable classical processors by using programmable quantum machines;
• Simulation, to understand and solve problems such as chemical processes, the development of new materials, and fundamental physical theories, by mapping them onto controlled quantum systems in an analogue or digital way;
• Sensing and metrology, to achieve unprecedented sensitivity, accuracy and resolution in measurement and diagnostics, by coherently manipulating quantum objects.

The fifth Basic Science domain will operate horizontally, developing the novel technologies that can impact the individual application areas.

"The QT Flagship is a very ambitious program, very timely with the current growth in the field in order to provide quick response to today's opportunities and urgent needs, but also with long-term objectives to tackle major challenges and establish a global leadership," said Iñigo Artundo of VLC Photonics, an industry member of the Flagship High-Level Steering Committee, speaking to Optics.org.

"Its goal is to make a very significant step forward in the maturing and application of quantum technologies for many different sectors of our society. For this large ambition to become a reality, the Flagship also needs the commitment, efficient coordination and funding support of all the Member States, and also the close interfacing with industry to identify market needs and transition to higher technology readiness levels."

To that end, implementation of the QT Flagship will significantly differ from the two existing EC Future and Emerging Technologies (FET) Flagship projects, studying graphene and the human brain. The QT Flagship will not have a single core consortium, but operate instead as a set of individual but closely connected research projects, all addressing the agreed Strategic Research Agenda.

"The QT Flagship intends to gather many different research and industry actors to focus on the four main domains, progressing in a very focused and directed way, aligned with the strategic goals given by the EU Commission," said Artundo. "From an industrial perspective, it should serve as a way to kick-start a very know-how driven industrial ecosystem."

The Flagship's goal of establishing Europe as a leader in specific domains and a pole of international cooperation is reflected in the ten-year time period described in the report, but this could potentially be out of sync with the shorter timescales of commercial developers, and their wish to bring products to market sooner than that.

Richard Murray, business development manager for quantum technologies at Teledyne e2v, commented that he would like to see more explicit mention of the Flagship putting focus on key short-term technologies, including those which industrial developers are already expressing an interest in, and which will reach the market within a shorter period.

"I think the final report was very good, laying out a different, more structured style of research program than Europe has tried before, and I think this difference will significantly speed up the translation of ideas out of academic labs and into industry," Murray said.

"However, I think the Flagship could have been much bolder with its ambitions to see the technology being taken up by industry and becoming real products over its ten-year lifetime. I would like to see elements of the Flagship that will push European companies to the forefront of a new quantum technologies industry, with explicit initiatives aimed at accelerating industry uptake, enhancing knowledge exchange with companies and providing startups with the support and infrastructure they need for success."

Iñigo Artundo observed that although the QT Flagship spans a decade of R&D, the intention is for projects in each of the identified domains to address three-year short-term and six-year medium-term milestones too, helping to provide the industry partners with closer-to-market application goals.

"From the industrial perspective, some of the most important points - such as workforce education and training, IP protection or investment and funding options - have been addressed and will be further developed during the ramp-up phase," Artundo noted.

Calls for research proposals under the QT Flagship are currently expected to be made before the end of 2017, with the intention that the first projects are up and running one year from now, in order to build on current momentum within the quantum technologies field.