Cornerstone laid for a new photovoltaics-focused research and development laboratory building at Fraunhofer ISE in Freiburg. 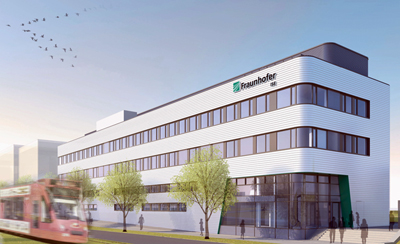 Impression of the Center for High-Efficiency Solar Cells at Fraunhofer ISE, Freiburg.

The Fraunhofer Institute for Solar Energy Systems (ISE) has for more than 30 years been one of the world’s leading research institutes for solar energy. In the field of photovoltaics, the ISE has repeatedly set records for efficiency for various solar cell technologies – thereby helping to put Germany at the forefront of international R&D in this field.

In order to strengthen Germany's position, the institute is now constructing a new building with a clean room equipped to handle the latest technological challenges. The cornerstone of the Center for High-Efficiency Solar Cells was laid last week in Freiburg. By financing this building, the federal government and the government of Baden-Württemberg say they are showing their commitment to PV research.

In its launch announcement, the ISE commented, "Over the past 15 years, the international market for photovoltaics has grown by more than 30 percent per year, with the costs of PV modules declining by more than 80 percent over the same period. Yet the potential for photovoltaics is far from exhausted. Research and industry are working hard to further improve efficiency and reduce the costs of solar cells, while also addressing aspects of sustainable production."

The Fraunhofer ISE has recently set several records for solar cell efficiencies, including: 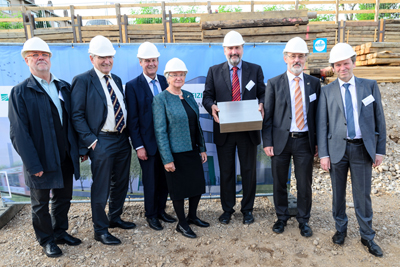 The cornerstone is safely laid for Center for High-Efficiency Solar Cells.

Fraunhofer ISE’s new “Center for High-Efficiency Solar Cells” in Freiburg is intended to build upon this solid foundation. It will include infrastructure to replace the outdated clean room for solar cell development and is will also be properly equipped for the next generation of solar cells.

“We are delighted that in designing the new clean room facilities, we were able to adjust the infrastructure to meet the latest technological challenges,” said institute director Dr. Andreas Bett. "We are grateful to the Federal Ministry of Education and Research (BMBF) and the Federal State of Baden-Württemberg for financing the new laboratory building. With their contributions, they are recognizing the importance of German research activities in the area of photovoltaics.”

Prof. Hans- Martin Henning, the other institute director under Fraunhofer ISE’s new joint leadership system, stressed the prominent role that photovoltaics is set to play in a future sustainable energy system based on renewable energies, commenting: “When it comes to the cost-effective realization of the energy transition, our energy system analyses make clear that photovoltaics and wind energy will be the pillars of our future energy supply.”

Baden-Württemberg’s Minister of Economic Affairs, Labor and Housing, Dr. Nicole Hoffmeister-Kraut emphasized that with its work, Fraunhofer ISE is making a “major contribution to the affordability and success of the energy transition.” She also noted the institute’s international standing and excellent reputation in solar research. “The new Center for High-Efficiency Solar Cells is an important element in maintaining this position.”

The federal and state governments provided a total of 32.6 million euros for the “Center for High-Efficiency Solar Cells” project. Baden-Württemberg’s contribution also communicates its strength as a center for the photovoltaics industry. The cornerstone of the “Center for High-Efficiency Solar Cells” was laid on Berliner Allee in Freiburg. Construction is scheduled to be completed by the end of 2019.