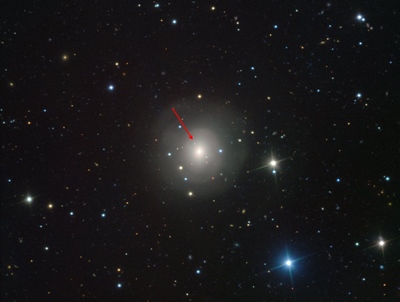 Astronomers at telescope facilities around the world have for the first time detected both gravitational and electromagnetic waves from a single source - the merger of two neutron stars, resulting in the first observation of a “kilonova” explosion.

The global collaboration was sparked by the largest (and, at 100 seconds, longest) gravitational-wave (GW) signal yet detected by the twin laser interferometer (LIGO) sites in the US, on August 17.

That event saw no fewer than 70 different telescopes then pointed towards the area of sky from which the initial GW signal appeared, with associated light signals detected across the electromagnetic spectrum, from a gamma-ray burst (GRB) and optical-infrared images to delayed radio-frequency (RF) and X-ray counterparts.

#GoldenBinary
The unprecedented scientific result confirms some aspects of fundamental astrophysics, while simultaneously opening the path to a greater understanding of GRBs, neutron stars, radioactive element formation, and more.

The giant collision between the binary neutron stars was also observed spectroscopically – with astronomers confirming the formation of gold and platinum metal weighing more than ten times that of Earth.

One of the lead scientists on the team, Stephen Smartt from Queen’s University Belfast, said in an ESO press conference revealing the discovery that two aspects of the latest GW signal stood out against the four previous events detected by LIGO – all of which related to black-hole collisions.

One was the length of the signal – it lasted more than 60 seconds, when the four previous GW events each lasted for less than a second. On top of that, two NASA satellites detected a GRB signal that arrived just two seconds after the GW source, from approximately the same area of the sky.

“Astronomers got very excited,” Smartt added, because the near-simultaneous GW and GRB signals suggested that this was not another black-hole merger, but potentially a neutron-star collision.

“That gave us the opportunity to search directly for an optical [and] infrared counterpart that would exactly pinpoint the position in the sky of the GW source.”

Kilonova ‘flash’ seen within one hour
Smartt explained the GW signal came from the southern hemisphere, meaning that ESO’s suite of large telescopes in Chile were ideally placed to search for any “transient” optical signals relating to the GW and GRB events.

However, it was daytime in Chile when those signals appeared – meaning that none of the telescopes there could observe anything immediately. But Smartt added that, by the time dusk fell in Paranal, the LIGO-Virgo collaboration had refined their localization of the GW signal, to the extent that searching for an electromagnetic counterpart became feasible.

Several telescopes in Chile then started to map out the region of interest – which, at this point, was still equivalent to a sky area equivalent to 100 full moons. Some telescopes mapped the entire area while others concentrated on looking at the brightest local galaxies.

Zooming in to show a bright object in the galaxy NGC4993 in the constellation Hydra, Smartt said that within just one hour of observing, seven telescopes saw a “new point source of light” in that galaxy. “This object here is the first optical and near-infrared counterpart to a GW source. This is what caused the GW source on August 17, and the GRBs that we saw.”

Astronomers are certain about that because the object is both in the LIGO-Virgo localization region of the sky, and lies at exactly the same distance – some 130 million light-years away - that LIGO’s signal analysis had suggested.

The same galaxy has also been observed more than a thousand times before, with no previous sign of the bright “kilonova” point source. “It popped up within the first night of observing,” said Smartt.

Over the next couple of weeks, ESO’s telescopes observed the same object every night. “It’s possibly the most unusual flash in the sky that we’ve ever seen,” Smartt remarked. Within the first 24 hours of observations the object appeared bright blue in color, before fading and turning red so rapidly that it marks an “unprecedented” event, he added.

“We find supernovae all the time,” Smartt said. “There’s a supernova every second in the whole universe. This looked nothing like the supernovae that we find in the local universe.

“This kind of object has been termed a ‘kilonova’, and this is the first discovery of one.”

Decades-long mystery ‘solved’
That rapid fading over the course of two weeks is also said to match near-perfectly the models that have been created for merging neutron stars. One of the predictions is the creation of lots of heavy elements, including radioactive ones, as a result of the collision, and spectroscopic analysis of the resulting “flash” by the Hubble Space Telescope and ESO’s Very Large Telescope (VLT) has confirmed the presence of huge amounts of gold and platinum, among other things. 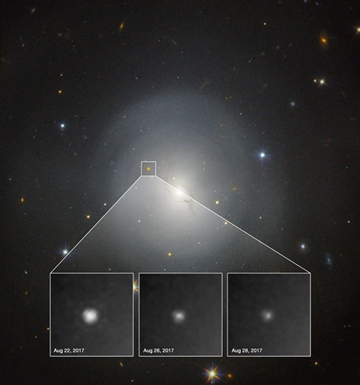 “The observations … reveal signatures of recently synthesized material, including gold and platinum, solving a decades-long mystery of where about half of all elements heavier than iron are produced,” noted the US National Science Foundation (NSF), whose funding of LIGO’s construction represents the largest commitment of cash to a single scientific project in its history.

Other ESO scientists heralded the discovery as “historic”, with Stefano Covino saying: “The data we have so far are an amazingly close match to theory. It is a triumph for the theorists, a confirmation that the LIGO–Virgo events are absolutely real, and an achievement for ESO to have gathered such an astonishing data set on the kilonova.”

“ESO’s great strength is that it has a wide range of telescopes and instruments to tackle big and complex astronomical projects, and at short notice. We have entered a new era of multi-messenger astronomy!” added Andrew Levan.

NSF director France A. Córdova also hailed the result, saying: “This discovery realizes a long-standing goal many of us have had: that is, to simultaneously observe rare cosmic events using both traditional as well as gravitational-wave observatories.

“Only through NSF's four-decade investment in gravitational-wave observatories, coupled with telescopes that observe from radio to gamma-ray wavelengths, are we able to expand our opportunities to detect new cosmic phenomena and piece together a fresh narrative of the physics of stars in their death throes.”