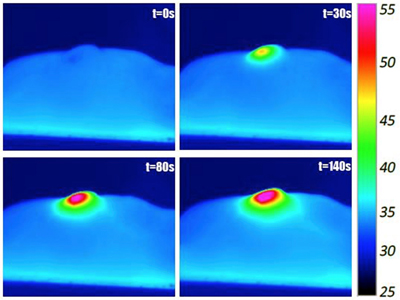 The mechanical resistance of tumors and collateral damage caused by standard treatments often hinder efforts to defeat cancers. However, a team of researchers from the French National Center for Scientific Research (CNRS), the French National Institute of Health and Medical Research (INSERM), Paris Descartes University, and Paris Diderot University has successfully softened malignant tumors by heating them by laser delivered by carbon nanotubes.

This method, called nanohyperthermia, makes the tumors more vulnerable to therapeutic agents. First, carbon nanotubes (CNTs) are directly injected into the tumors. Then, laser irradiation activates the nanotubes, while the surrounding healthy tissue remains intact. The team's work was published on January 1st in Theranostics.

Nowadays, researchers are increasingly turning their attention to the mechanical factors affecting tumor development. Tumors stiffen due to the abnormal organization of the collagen fibers and the extracellular matrix (ECM) that holds cells from the same tissue together.

As well as being a marker of malignancy, such stiffening may help cancer cells to proliferate and metastasize. The ECM forms a physical barrier that limits tumor penetration by therapeutic agents. Various treatments attempt to disrupt the structure of tumors but are double-edged swords: as ECM is common to tumors and healthy organs, degrading it can do as much damage as good.

The French team found a way around this problem for mouse tumors. After being directly injected into the tumors, CNTs were activated with near-infrared light. The laser only acts on areas of CNT concentration, heating them up. The researchers monitored tumor stiffness noninvasively using ultrasound shear wave elastography.

In two consecutive sessions at a day's interval, the tumors were exposed to nanohyperthermia, or localized heating to 52°C for three minutes. Tumors initially became more rigid before gradually softening over the 10 days or so that followed the procedure. Nanohyperthermia denatures collagen fibers locally and reduces the rigidity and volume of tumors over the long term. It disrupts the tumor microenvironment and may prove effective as an adjuvant treatment with chemotherapy.

Describing the researchers’ achievements and implications of their work, the Theranostics paper stated, “Over the days following photothermal treatment, the treated tumors exhibited a significant softening together with volume reduction, whereas non-treated growing tumors showed an increase of tumor rigidity.

”The organization of the collagen matrix and the distribution of CNTs revealed a spatio-temporal correlation between the presence of nanoheaters and the damages on collagen and cells. This study highlights nanohyperthermia as a promising adjuvant strategy to reverse tumor stiffening and normalize the mechanical tumor environment.”