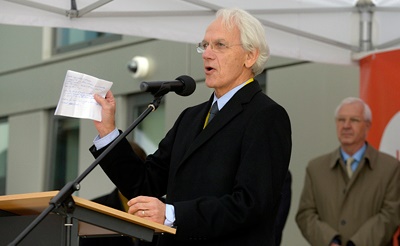 Specifically, the prestigious award recognizes Mourou’s development of the chirped pulse amplification (CPA) technique, where pulses of laser light are first stretched and then compressed. Used by virtually all of the world’s ultra-high-power laser facilities, the approach generates peak powers that are several orders of magnitude higher than would be otherwise possible.

Fundamental interactions
CPA is also used to generate femtosecond laser pulses used for ophthalmology, with the Berthold Leibinger Foundation estimating that more than one million patients now benefit from the technique every year.

“What we are trying to do is understand the fundamental relationship between light and matter,” said Mourou in a promotional video produced by the Berthold Leibinger Foundation (see below).

That relates to the future work at the three ELI centers in the Czech Republic, Hungary and Romania. At the first of the state-of-the-art centers, the ELI Beamlines facility near Prague, construction of the various laser systems is ongoing after a “grand opening” event nearly a year ago.

According to the latest newsletter from ELI Beamlines, the front end of the “L1” beam is now complete, with CPA used to generate a train of 100 mJ, 15 femtosecond pulses at an unprecedented repetition rate of 100 kHz.

While much of the work at ELI will be focused on fundamental physics and material science, Mourou highlights the more tangible benefits to medicine that he hopes will also arise. He said:

“My wish for the future is trying to understand why light propagates in a vacuum, and to be able to produce protons to cure cancer by photon therapy – which we think is the best way to do it.”

Mourou was presented with the award, which includes a €30,000 cash prize, at a ceremony held in Ditzingen, Germany, on September 9. Currently heading up “IZEST”, the International Center for Zetawatt-Exawatt Science and Technology at École Polytechnique in France, the much-travelled scientist previously founded the influential Center for Ultrafast Optical Science (CUOS) in Michigan, US, and the Advanced Photon KPSI Center in Japan.

Innovation prizes
Claiming first place in the “innovationpreis” part of the Berthold Leibinger awards was Balthasar Fischer from Austrian firm Xarion Laser Acoustics, for the development of membrane-free optical microphones.

The new kind of acoustic sensor is able to pick up tiny changes in pressure using laser interferometry, without any moving or deformable parts. Applications for the technology are said to extend across metrology, including non-destructive testing, detection of wear and tear, as well as photoacoustic imaging and active noise cancelling. 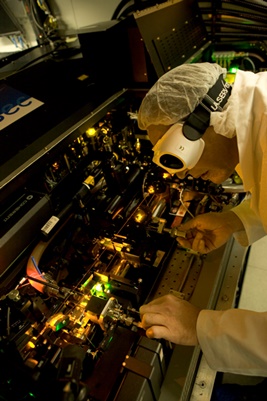 Toptica inside: the laser guide star at ESO

Awarded joint second place for innovation were representatives from Vienna’s Crystalline Mirror Solutions and a research collaboration from Germany that has developed a direct laser interference patterning system.

Crystalline Mirror Solutions has pioneered a way to transfer optical coatings onto arbitrary substrates – including high-performance laser optics – while the new approach to patterning is expected to prove useful in photovoltaics, tribology, and security tags, among other applications.

The twinkling of those guide stars can be fed back into complex adaptive optics systems in the telescopes to sharpen images of distant planets, stars, galaxies and other cosmic phenomena.