MIT and Singapore UTD develop optical process and polymer, which could aid in drug delivery and solar panel tracking. 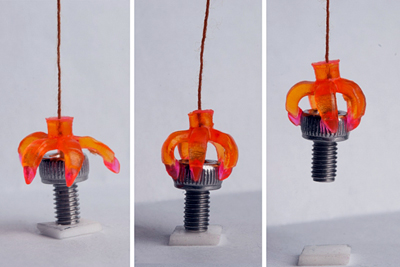 Engineers from MIT and Singapore University of Technology and Design are using an optical process to print three-dimensional structures that “remember” their original shapes. Even after being stretched, twisted, and bent, the structures — including a 25mm-tall replica of the Eiffel tower — return to their original forms after being heated to a certain temperature.

For certain structures, the researchers can print micron-scale features — which they say are at least one-tenth as big as what others have been able to achieve with printable shape-memory materials. The team’s results were recently published in Nature’s Scientific Reports.

Nicholas Fang, associate professor of mechanical engineering at MIT, says shape-memory polymers that can morph predictably in response to temperature can be useful for a number of applications, from soft actuators that turn solar panels toward the sun, to tiny drug capsules that open upon early signs of infection. “We ultimately want to use body temperature as a trigger,” said Fang. “If we can design these polymers properly, we may be able to form a drug delivery device that will only release medicine at the sign of a fever.”

Fang’s coauthors include former MIT-SUTD research fellow Qi “Kevin” Ge, now an assistant professor at SUTD; former MIT research associate Howon Lee, now an assistant professor at Rutgers University; and others from SUTD and Georgia Institute of Technology. Ge says the process of 3-D printing shape-memory materials can also be thought of as 4-D printing, as the structures are designed to change over the fourth dimension — time.

“Our method not only enables 4-D printing at the micron-scale, but also suggests recipes to print shape-memory polymers that can be stretched 10 times larger than those printed by commercial 3-D printers,” said Ge. “This will advance 4-D printing into a wide variety of practical applications, including biomedical devices, deployable aerospace structures, and shape-changing photovoltaic solar cells.”

To print shape-memory structures with very fine details, Fang and his colleagues used a 3-D printing process they have pioneered, called microstereolithography, in which they use light from a projector to print patterns on successive layers of resin. The researchers first create a model of a structure using computer-aided design (CAD) software, then divide the model into hundreds of slices, each of which they send through the projector as a bitmap — an image file format that represents each layer as an arrangement of very fine pixels.

“We’re printing with light, layer by layer,” said Fang. “We’re doing it with high-resolution lenses that come from the semiconductor industry, which give us intricate parts, with dimensions at the micron scale.”

The researchers then researched the optimal mix of polymers to create a shape-memory material on which to print their light patterns. They picked two polymers, one composed of long-chain polymers, or spaghetti-like strands, and the other resembling more of a stiff scaffold. When mixed together and cured, the material can be stretched and twisted dramatically without breaking.

The team printed a variety of structures, including coils, flowers, and the miniature Eiffel tower, whose full-size counterpart is known for its intricate steel and beam patterns. Fang found that the structures could be stretched to three times their original length without breaking. When they were exposed to heat within the range of 40 C to 180 C, they snapped back to their original shapes within seconds.

This research is supported in part by the SUTD Digital Manufacturing and Design Center (DManD) and the SUTD-MIT joint postdoctoral program.