Optical technology will supplement or replace wired fieldbus or Ethernet systems; to be demonstrated at ECOC 2016. 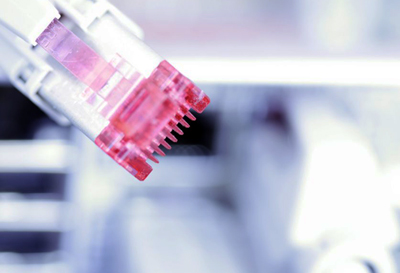 A team at the Fraunhofer Institute for Photonic Microsystems (IPMS) in Dresden, Germany, has developed a Li-Fi communication module that enables wireless networking of devices used in industrial production.

The optical transmission technology not only facilitates the exchange of huge amounts of data, but also supports the high real-time characteristics of automation technology. The technology is intended to supplement or replace wired fieldbus or Ethernet systems, which are prone to wear and tear.

The factory management system known as Industry 4.0 has already been introduced in many companies. In the “intelligent factories” of tomorrow, say the IPMS Li-Fi developers, processes will be fully automated and manufacturing and logistics will become increasingly computerized."

Many cases will require the communication system and data transmission cycle times to be synchronized at a tact of less than one millisecond. To meet these growing challenges of industrial networks, companies have long tended to replace or supplement slow communication links existing in the field of production and process automation with Ethernet-based and real-time fieldbus systems.

The Fraunhofer IPMS Li-Fi communication module, named GigaDock, provides substantial advantages in such situations. Project Manager Dr. Alexander Noack commented, “Our GigaDock uses the available regulatory-free spectrum of light with a bandwidth up to 12.5 gigabits per second. That's 10 times faster than current wireless solutions such as WLAN, Bluetooth or ZigBee.”

“We were able to achieve very good real-time characteristics at distances of up to 50 mm and demonstrate latency values of less than one millisecond.” The driverless transmitter/receiver modules combine an optical transceiver and a protocol controller with a Gigabit Ethernet interface and can thus be easily integrated into industry-standard systems.

Developers from the Fraunhofer IPMS will present the GigaDock communication module along with other Li-Fi demonstrators for greater distances of up to 10 meters between September 19-21 at the ECOC 2016 conference and expo in Düsseldorf, Europe's largest conference and exhibition for optical communications. Fraunhofer IPMS provides individual Customer Evaluation Kits for the testing of its Li-Fi technology for different fields of application.