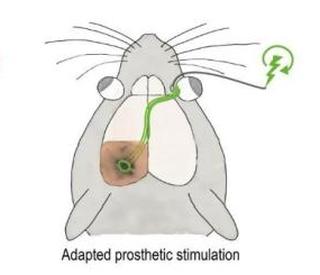 A decade of progress in the development of retinal prostheses has led to significant breakthroughs in the fight against some degenerative eye diseases, particularly age-related macular degeneration and retinitis pigmentosa, and held out the prospect of restoring a level of vision to sufferers.

Developers acknowledge, however, that the images generated to date by the prostheses fall a long way short of the clarity and fidelity of natural sight, and finding ways to improve image quality is a focus of attention.

A collaboration between researchers from France's CNRS, CEA, Inserm, Marseille's AP-HM and Aix-Marseille Université has now led to a systematic study of the factors limiting the resolution of retinal prostheses, by comparing their operation in a rat's visual cortex to that of an animal's natural vision system. The work was published in eLife.

The team studied sub-retinal prostheses - one of the two main classes of implant under development, each with their advocates and claimed advantages. This design includes an array of electrodes positioned at the level of the photoreceptor cells in the retina, from where they can directly stimulate other retinal cells and make full use of those inner and middle retinal layers that remain correctly functioning.

The new study aimed to compare how a rat's brain responds to natural visual stimuli, and compare it with the response being activated by an array of micro-electrodes in a prosthetic. It used a combination of OCT and fundus imaging to map the activity of retinal ganglion cells leaving the retina, as a way to model the profile of visual cortex activation in the animal, first with natural vision and then with a prosthetic.

Right place, wrong aspect ratio
In the eLife paper, results showed that the prosthetic stimulation produced a functional response of the expected amplitude at the known retinotropic locations, but that both the extent of the activation and the aspect ratio of the area being activated were significantly larger than expected.

A likely cause is diffusion of the electrical currents created by the micro-electrodes in the prosthesis into surrounding retinal tissue, and the undesired activation of neighboring ganglion cells - leading to a degraded image as perceived by the subject.

Since the pattern of activation arising from natural vision was known, the project set about reverse-engineering the right patterns of electrode stimulation to corresponded to the higher quality of vision, and found that it was indeed possible.

"We tested various patterns of electrical stimulation and showed that supervised design of the electrical pulses, taking into account the physical filtering properties of the electrode-retina interface, allowed focalizing the activation," note the team in the eLife paper.

This opens up the possibility of improving the image quality provided by retinal implants in humans, by controlling more precisely the patterns of stimulation they generate in the cells they act upon. Further studies on primates or other animal models are expected.

The team also noted that the study indicated the importance of such animal testing in the development of improved retinal prostheses in humans.

"Our work demonstrates that pre-clinical studies are a necessary prerequisite to validate and improve the efficiency of retinal implants, equivalent to animal models that are the foundation of any drug development for human pharmacology," they commented. "We thus expect that our study will pave the way for fast and significant improvements of the clinical benefits offered to implanted patients."