Canadian firm will complete enclosure design and production readiness phase, with TMT still to finalize a site for the giant observatory. 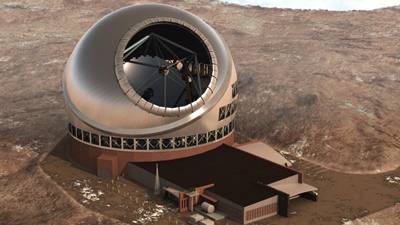 Artist's impression of TMT and site

Vancouver-based Dynamic Structures has confirmed it won a $10 million contract to design the enclosure that will house the giant Thirty Meter Telescope (TMT).

Set to feature a primary mirror comprising 492 hexagonal segments and a folded Ritchey-Chrétien optical setup, the TMT's site was originally scheduled to be under construction at the summit of Mauna Kea on Hawaii Island by now.

However, the build schedule and even the eventual location of the telescope were thrown into doubt in late 2015 when its construction licence was revoked by local authorities under pressure from residents opposed to the development on religious and environmental grounds.

Mauna Kea is already home to several large observatories, including the Gemini Observatory, the James Clerk Maxwell Telescope, and Japan’s Subaru Telescope, although the TMT would dwarf each of them.

At the SPIE Astronomical Telescopes and Instrumentation conference held in Edinburgh in late June, TMT spokesman Fengchuan Li said that although the telescope consortium was continuing to meet with the Mauna Kea authorities on a monthly basis, alternative sites were also now under evaluation – with a final decision on its location expected by early 2017.

Once TMT is up and running, its sophisticated adaptive optics system envisaged is expected to generate images ten times sharper than the Hubble Space Telescope, while it will be able to detect across a huge range of wavelengths stretching from 310 nm ultraviolet light to 28 µm deep in the infrared.

That will allow investigations of early galaxies, black holes, planet formation and characterization of extra-solar planets. TMT scientists are also expected to work closely with those using the James Webb Space Telescope (JWST), with JWST locating targets that could then be studied in more detail using the TMT spectrometers.

Site choice could impact enclosure design
In Edinburgh, Li admitted that the eventual location of the TMT could affect its precise design, given the different weather and wind conditions to be found at alternative proposed mountain-top sites in the Canary Islands, Baja Mexico, and Chile, compared with Mauna Kea.

Dynamic Structures, which is part of the diversified steel conglomerate Empire Industries, said it expected to complete the enclosure design over the next 20 months, which suggests that the consortium is confident that the location issue will soon be resolved.

Just a week ago, the TMT consortium said that a new poll completed in July showed 60 per cent of residents were in favor of the telescope construction, which would bring significant new investment and employment to the area. The proportion opposed to construction also appeared to have fallen to 30 per cent, said pollsters Ward Research.

TMT’s executive director Ed Stone said in a consortium statement: “It was important for us to understand how Hawaii Island residents feel about the project, and the latest poll results demonstrate that opposition to TMT on Hawaii Island is decreasing.

“That's significant and we are most grateful that the community’s support of the project remains high. The findings also show that the general public on Hawaii Island understands the benefits TMT will bring in terms of Hawaii's economy and education, both of which are very important to TMT.”

However, the results of the opinion poll did appear to vary significantly, depending on exactly who was asked. While 60 per cent of “Big Island” residents were in favor of the build overall, that figure dropped to only 46 per cent for Hawaiian and part-Hawaiian residents Island, with nearly the same number in opposition.

Hawaii permit still sought
According to TMT’s latest announcement, Mauna Kea remains the preferred choice for the telescope location, with work continuing to regain a permit to build on the original site. “TMT is simultaneously evaluating alternative sites, should the Hawaii option not prove feasible,” said the consortium, with Stone adding:

“We hope that permitting activities continue apace in Hawaii so that TMT can be under construction on Maunakea [sic] by April 2018.”

In partnership with institutional and government backers in the US, Japan, China and India, Canada is providing $243.5 million in support over ten years for the TMT project.

Dynamic Structures says that it has developed an innovative calotte (skullcap-like) shape for the TMT enclosure. “The design significantly reduces the size and improves the speed of the enclosure, to effectively shield the telescope and instruments from temperature variations, unbalanced wind forces, snow and ice,” says the firm, adding that the 55 meter-high structure will rotate and track the telescope's field of view.

While the enclosure design should be completed in early 2018, subsequent phases including its fabrication, shipping to the eventual project site, and commissioning of the structure, have not yet been awarded.

Empire Industries’ CEO Guy Nelson said: “It is an honor to be selected to design one of the most sophisticated moving structures on the planet. Dynamic Structures has been actively working on TMT since it was first conceived over ten years ago. We are looking forward to seeing it through to completion.”