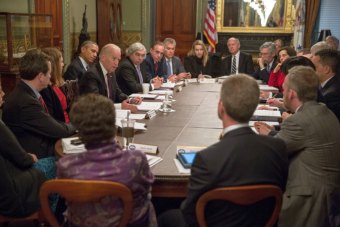 Political will: a new intention to double the speed of cancer research

In January 2016 President Barack Obama announced a new national "moonshot" initiative with the declared goal of eliminating cancer as we know it, along with an initial $1 billion to be allocated to jump-starting the task over the next two fiscal years.

The program, led by Vice President Joe Biden, marshals a multidisciplinary effort across a number of US government agencies and research efforts, and focuses on a set of challenges that will have to be met in making anti-cancer therapies available to more patients and improving the technology used to detect and diagnose the disease.

Optical imaging has a key role to play in this effort, building on the many ways in which photonics is already being exploited in cancer diagnosis and treatment.

Last week the US National Photonics Initiative (NPI) published its own initial recommendations for how new optical technologies should contribute to early detection and effective intervention in cancer treatment, as well as how the infrastructure of the US healthcare system might need to be modified to reach the president's goal.

Titled "A Brighter Future: Achieving the Goals of the Cancer Moonshot through Adoption of New and Enhanced Technologies and a Transformed IT Health System," (pdf) it details the commitment now being made across the scientific community, technology developers, hospitals and patient advocacy groups to leverage their annual investment in cancer research and therapeutics - some $3 billion - towards maximizing existing and new early detection and treatment technologies, while also exploring cost-effective approaches amenable to community-based practices.

"Our intention is to make a decade of advances in cancer prevention and diagnosis, as well as in treatment and patient care, in five years," commented Lauren Leiman, Senior Director of External Partnerships at the White House Cancer Task Force, discussing the NPI report. "Ten years' worth of progress, in half the time."

• The first is more funding over the next five years for clinical studies using already existing non-invasive and minimally invasive imaging technologies and their companion molecular tests for early detection of cancer - particularly breast, colon and gastric cancers where current optical imaging modalities have large potential.

"We have now created twelve public partnerships and 26 public-private-partnerships," commented Leiman. "I believe that the future of advances against cancer now lies in the intersection of these relationships. Combining resources and hearing from across all of the stakeholder universe is vital."

• The third requirement is development of a shared IT infrastructure capable of supporting the large amounts of data generated by new imaging modalities and other photonics-based techniques, along with secure cloud-based data storage to make them available to more people. Such a national infrastructure would give patients, doctors and researchers access to quantitative diagnostic medical data, and enable more rapid reporting of patient outcomes. It would also facilitate the key financial reimbursement decisions affecting the entry of new technologies.

Narrow victories
"The war against cancer has been characterized by lengthy campaigns leading to a limited number of significant, but narrow, victories," commented Tom Baer, chairman of the NPI Cancer Moonshot Task Force, outlining the NPI strategy.

"For some cancers, several of the technologies needed to improve this picture already exist and are installed in hospitals and clinics. In these cases, what is now needed are robust instrument calibration techniques to ensure site-to-site reproducibility of imaging measurements; technicians and radiologists trained in computer-aided quantitative measurement; and an IT infrastructure scaled to allow quantitative 2D and 3D image files to be routinely available for comparison."

However, an attack on certain other cancers currently awaits the development of suitable technologies to diagnose and treat them. Baer noted that more effective early detection technologies for ovarian, brain, and prostate cancers still need to be developed, along with multi-parameter imaging techniques to simultaneously assess both the physiology of a tumor and its biological activity - such as its use of oxygen, a key aspect of cancer growth now being studied by optical means.

"Focused investment in these areas through a public-private-partnership could significantly improve early detection rates and survivors," he said.

The NPI report commented specifically on ovarian cancer, where the lack of early detection methods coincides with an absence of available biomarkers that would guide therapeutic intervention. New quantitative imaging diagnostic technologies and a series of coordinated clinical trials are critical to detecting the earliest signs of this cancer, and better identifying the molecular signatures indicating the most effective drug treatment in its early stages.

A similar opportunity lies in the current lack of imaging methods able to detect cancer-positive lymph nodes without removing the nodes from the patient, as an alternative to excision and subsequent biopsy. An emerging solution is based on near-infrared fluorescence imaging technologies, offering a low cost, point-of-care method to assess the tumor load at the molecular level in the lymphatic system prior to the node's removal.

"Advancements in optics and photonics technologies as well as high sensitivity molecular diagnostic tests are essential for ushering in these next-generation tools that will benefit patients across the spectrum of cancer management," concluded Alan Willner, chair of the NPI Steering Committee. "The NPI looks forward to continuing to engage with a broad array of stakeholders who can define and exploit opportunities that will significantly impact efforts to achieve the National Cancer Moonshot Initiative goals."