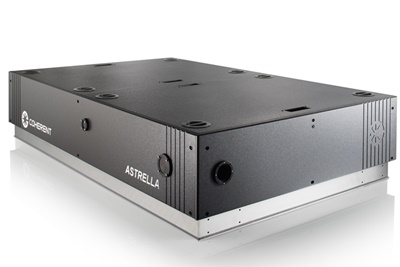 Coherent has reported record sales in the third quarter of its 2016 fiscal year, along with a continued boom in orders driven primarily by demand for excimer systems used to make organic LED (OLED) displays.

At $218.8 million, the quarterly sales figure represented a new record for the Californian laser firm, although that will soon be eclipsed – CEO John Ambroseo and his executives are expecting to post sales of around $240 million in the next fiscal quarter ending in September.

And while bookings were down 21 per cent on the extraordinary total of nearly half a billion dollars reported by the company in May, at $390.8 million in the third quarter they still represent a huge uptick on last year and are further confirmation that a major switch from LCD to OLED screens is under way in the mobile handset industry.

With Ambroseo telling investors that Coherent remains engaged with a number of customers in the FPD sector, that order boom looks set to continue over the coming months as manufacturers gear up to produce screens for mobile handset launches in 2018.

“The pipeline for the next round of FPD annealing orders is developing as customers refine their market share assumptions and larger-format displays gain traction,” said the CEO, stressing that the current tranche of orders all relates to mobile handset production. Any significant shift to OLED-based TVs, which command a much lower price per unit area of display, remains 3-5 years out, he added.

While the annealing step is the key one for Coherent’s sources, other opportunities are also starting to open up. “We are beginning to see orders for other process steps in OLED production including short-pulse lasers for film cutting and excimer lasers for laser lift-off,” Ambroseo told an investor conference call.

Laser lift-off relates to a process step where a flexible display is de-bonded from the stiff carrier glass on which it is initially produced – with an ultraviolet laser providing the required energy.

Asked about fiber laser giant IPG’s intentions to muscle in on the opportunity in FPD annealing – the Massachusetts company said at its recent investor day that it was engaged with three “top-tier” customers in the industry – Ambroseo said:

“While you can use other types of lasers to anneal [an FPD], you can’t get the combination of outcomes that the excimer laser produces.”

The CEO explained that this was in major contrast to laser cutting of metals, where fiber sources have been able to usurp carbon dioxide lasers partly because the cutting process remained the same. Switching to fiber lasers for FPD production would demand a different process, he said.

Flow cytometry wins
Away from FPDs, Ambroseo said that Coherent had also received some large orders from medical customers, with “key wins” for lasers and sub-systems used in flow cytometry and solid demand for applications in cataract and photocoagulation therapy.

In the materials processing space, although Chinese demand for laser cutting and marking was weak, there was strong demand for more advanced applications – while newer laser technologies also appear to be gaining traction.

“We also had two notable orders for ultrafast laser processing, one for fuel injector nozzle drilling and the other for manufacturing diamond tool heads,” said Ambroseo.

In the scientific market orders were down slightly while researchers in Asia and Europe awaited project funding, but the CEO said that Coherent’s new “Astrella” ultrafast lasers were proving popular thanks to their ease of use and reliability.

“I can’t emphasize the reliability aspect enough,” he told investors. “We are confident that this will further improve users’ experience while reducing our warranty expenses."

On the impending acquisition of industrial laser firm Rofin-Sinar, Coherent still expects the deal to be finalized before the end of the year, and is currently working on the arduous process of gaining regulatory approval from the European Commission. 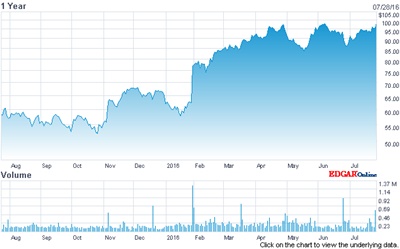 Rofin’s shareholders have already approved the $942 million deal, while US regulators recently gave it the green light. “We have made steady progress on integration planning and expect to hit the ground running after closing the deal,” said Ambroseo.

• The recent order boom from the FPD industry has helped push Coherent’s stock price close to an all-time high. Shortly after releasing its latest quarterly results, the firm was trading at around $101 – a sharp rise from around $60 at the start of 2016, and equivalent to a market capitalization of some $2.4 billion.