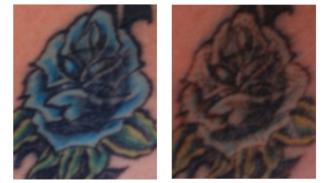 Blue and green should not be seen: tattoo removal

Aesthetic laser developer Syneron Candela has announced the addition of a new wavelength to its PicoWay laser platform, which should enhance its effectiveness as an effective tattoo removal system.

FDA clearance has now been given to the use of a 785 nm wavelength generated by a titanium sapphire laser, said by the company to be the first of its kind in the aesthetic market.

This should improve the ability of the PicoWay platform to remove blue and green inks in tattoos, pigments known to be more difficult to treat effectively than some other colors.

PicoWay has previously been a dual-wavelength system, delivering 532 nm and 1064 nm wavelengths from a Nd:YAG source in picosecond pulse lengths, for treatment of both tattoos and pigmented lesions. According to the company's product data, 532 nm light is particularly suitable for acting on red, yellow and orange pigments, while black, brown, green, blue and purple colors are treated by the 1064 nm wavelength.

The original PicoWay platform received its FDA clearance for tattoo removal in 2014, followed by approval to use the system to treat pigmented lesions in 2015.

Short pulses required
Laser tattoo removal works by heating the colored pigment to a high enough temperature to fragment it into smaller particles, that are then removed from the area naturally by the body. As well as the right wavelengths for the inks in question, this process also needs a pulse length short enough to raise the temperature of the pigment sufficiently, before that heat can dissipate into surrounding skin and cause burns or other damage.

The FDA's clearance of the 785 nm wavelength follows assessment of a 15-patient study, covering 22 tattoos, of which 18 contained blue and green inks. Evaluation by independent physicians showed that 83 percent of the treated blue/green tattoos showed a response classified as "good" to "complete" after two treatments with the 785 nm wavelength, with no complications.

"This novel addition to the PicoWay enables optimal treatment for blue and green tattoos, and is a welcome addition to the 532 and 1064 nm wavelengths already available," commented Eric Bernstein, director of the Main Line Center for Laser Surgery in Philadelphia and chief investigator for the clinical study. "The new wavelength further enhances the already strong capabilities of the PicoWay platform for tattoo removal."

New and existing PicoWay customers in the US market will be able to use the 785 nm wavelength when it becomes available during the fourth quarter of 2016.