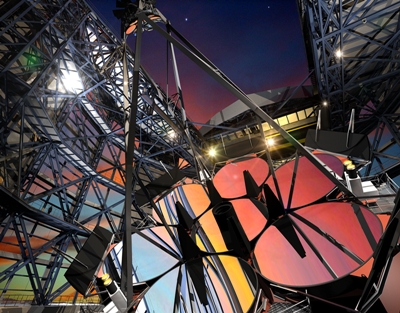 The organization behind the Giant Magellan Telescope (GMT), a 25 meter diameter observatory whose primary mirror is being constructed from seven 8.4 meter segments, is to host an “industry interaction conference” at its Pasadena, California, base this September.

Speaking at the SPIE Astronomical Telescopes and Instrumentation conference in Edinburgh, UK, GMT project director Pat McCarthy said that the university-led consortium was embarking on a major procurement drive, and wanted to see a very competitive set of proposals.

GMT’s organization is unusual, in that it is entirely funded with cash contributions from private partners, independent of any government or central funding agencies. As well as the US, the partners are based in Brazil, Australia, Korea, and Chile, with Harvard University, the Smithsonian Institution, the Korea Astronomy and Space Science Institute, and the Sao Paulo Research Foundation among those involved.

McCarthy told conference delegates that work on several of the seven large segments that will make up the primary mirror was “really starting to move in a big way”, and that the GMT Organization (GMTO) would issue a request for proposals for the final design and construction of the telescope main structure in late 2016. Those interested in taking part in the industry day should look out for further updates and details on GMT's dedicated page.

“The baseline design for the telescope and high-level requirements will be provided through the GMT web site,” stated GMTO. “Additional information supporting the bidding process will also be provided soon.”

McCarthy said that the involvement of industry would be a critical part of the telescope build, and that GMTO would welcome new partners as it enters into the construction phase of the project. Like many of the other large telescope projects now in development, GMT is also actively hiring to add engineering staff to its 85-strong team in Pasadena.

GMT specs
Currently slated for “first light” in 2022, the most obvious difference between GMT and other giant telescopes is that both its primary and secondary mirrors will in fact comprise seven segments that should be easier to produce than a single, enormous reflector. Each will be arranged in a concentric form, with six outer segments surrounding a central segment.

GMT’s primary mirror segments are being made at the Steward Observatory Mirror Lab (SOML), part of the University of Arizona in Tucson. The team there has already been working on the mirrors for more than a decade.

The primary mirror will feature 8.4 meter segments, while the secondary mirror – which will eventually feature adaptive optics, although that technology will not be ready at first light - will be based on 1.1 meter diameter segments.

Construction activities at the Las Campanas Observatory in Chile have recently begun following a "first stone" ground-breaking ceremony last November (see photo below), with a housing unit for the 200-strong construction team the first building to be put in place. Excavation and concreting of the summit site is slated for 2017.

McCarthy said that the GMT’s design would make for a very compact and stiff structure – needed for coping with the high winds at the 8000-ft summit – as well as very fast operation and high throughput. 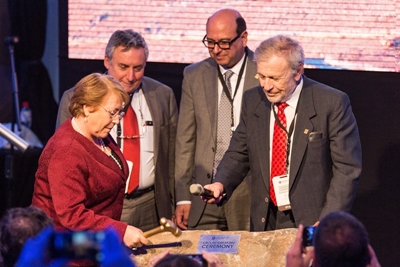 Exoplanet studies
Among the key goals for the GMT is the study of exoplanets, and of exoplanet atmospheres in particular. For that, a number of high-resolution spectrographs are under development, including the Visible Echelle Spectrograph – better known as “G-CLEF”.

McCarthy said that the G-CLEF kit would be used to probe for any signs of biomarker gases in exoplanet atmospheres, for example oxygen. “This is a real motivator,” he added.

Another spectrograph, known as “GMACS”, will be optimized to observe very faint objects and help the study of galaxy evolution in the early universe.