With a record number of submitted abstracts, attendees packed into Edinburgh’s International Conference Center to hear engaging talks from Hitoshi Murayama – on no less a topic than studying the “birth and fate of the universe” – and Martin Hendry, part of the Laser Interferometer Gravitational Wave Observatory (LIGO) team that hit the headlines earlier this year after what the University of Glasgow professor described as “the most exciting 12 months of my life”. 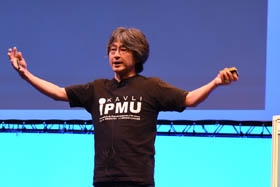 “Big rip”
Murayama, director of the Kavli Institute for the Physics and Mathematics of the Universe at the University of Tokyo, used the somewhat terrifying prospect of a future “big rip” tearing apart the cosmos to introduce the topic of dark energy and how it might be measured.

The theory goes that if there is sufficient dark energy, the universe will at some point pull itself apart completely. The only problem, as Murayama noted candidly, is “we have no clue what dark energy is”.

What may help change that is a new piece of spectroscopy equipment that is being built for the 8.2 m-diameter Subaru Telescope on Hawaii’s Big Island. Called the “Prime Focus Spectrograph”, it combines the giant 900 megapixel “Hyper Suprime-Cam” CCD detector with an array of 2400 optical fibers for spectroscopy and the very large field of view (1.5 °) of Subaru.

That would allow a “census” of individual galaxies and their red-shifts as seen from Earth, which in turn would give astrophysicists much more of a clue about the distribution of dark matter and energy.

Crucially, the wide field of view from Subaru means this telescope could complete that census of red-shifted stellar emission lines over the course of a 300-night survey, whereas similarly large instruments would impractically take in excess of five years.

Opening up the gravity-wave spectrum
When Glasgow’s Martin Hendry was invited to give a plenary talk, what the conference organizers did not know was that he was already aware of the remarkable findings that were set to be announced in February. 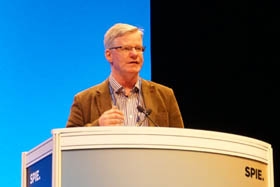 Just as remarkably, the detection of that cosmic collision between two black holes came just a day after the upgraded and more sensitive LIGO instruments had been switched on. In fact, Hendry said, it was only because the initial run with the advanced LIGO kit started a few days early that those waves were detected at all.

“We knew within just a few hours that we were in business,” Hendry told the Edinburgh conference, with the astonishingly large and clear signals even prompting thoughts that they could instead have been a so-called “blind injection” designed to test the LIGO team.

While Glasgow’s efforts to reduce the thermal noise of the mirrors used in the interferometers has been central to the discovery, what clearly enthuses Hendry now is that the twin LIGO facilities in the US – along with other gravity wave detectors at various stages of completion – will now be put to serious astronomical and astrophysical use.

One example could be to identify “standard sirens”, analogous to pulsars but with gravitational instead of electromagnetic waves, for even more precise universal timing and distance metrology.

In fact, that very first LIGO signal has already prompted something of a re-think in astronomical circles, given that it took place between much larger than expected black holes.

Virgo to add positional precision
Following another upgrade to LIGO equipment now in progress, Hendry expects those facilities to start picking up more gravity-wave signals, while the anticipated addition of the Virgo site in Italy later this year will allow the team to triangulate the sources of those waves with far greater precision that is currently possible.

That would also make follow-up studies of the sources with more traditional electromagnetic techniques like the detection of gamma-ray bursts far easier, while the prospective construction of the “IndIGO” facility in India would add a whole new level of precision to those observations.

But what seemed to excite Hendry most of all was the prospect of the “LISA” space antenna detecting gravity waves in orbit. Already showing great promise following the recent launch of test masses, LISA would open up whole new parts of the gravity wave “spectrum” that are impossible to view on Earth.

“It’s the green light for gravity-wave astronomy in space,” said Hendry of the LISA Pathfinder results, adding that it represented a tremendous achievement for the small university team involved – and of which Glasgow is again a key element. “I cannot wait to open up the multiple [gravity wave] windows of LISA in space,” he told Edinburgh delegates, although it is likely to be at least 15 years before that happens.