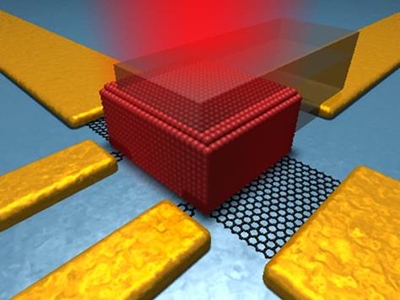 Two research groups at Barcelona’s Institute for Photonic Sciences (ICFO) have collaborated to make a hybrid photodetector incorporating both graphene and quantum dots.

Although the two material technologies are both at an early stage of development, the team claims that the combination could lead to fast, efficient, and low-cost devices capable of detecting across the visible, near-infrared and short-wave infrared (SWIR) spectral regions to a wavelength of around 3 µm.

At the moment, high-efficiency photodetection in the SWIR region beyond 1 µm tends to rely on indium gallium arsenide (InGaAs) devices, which although produced in large volumes rely on high-precision manufacturing techniques and are relatively expensive as a result.

Writing in the open-access journal Nature Communications, the team led by ICFO professors Frank Koppens and Gerasimos Konstantatos describe the performance of a lead-sulfide (PbS) colloidal quantum-dot (CQD) photodiode on top of a graphene phototransistor.

They reported a peak spectral response at 1.6 µm, although that absorption peak can be tuned by altering the size of the CQDs when they are synthesized.

“Our hybrid detector overcomes the limitations of a phototransistor in terms of speed, quantum efficiency and linear dynamic range,” wrote the team, pointing to quantum efficiencies in excess of 70 per cent, and a gain of 105.

Laser lithography
In the paper, the ICFO team also describes how the device was produced. The graphene transistor relies on direct-write laser lithography and electron-beam evaporation to create metal contacts and electrodes, with chemical vapor deposition (CVD) graphene grown on a copper foil before being transferred onto the substrate. Laser lithography was then used again, to pattern the graphene layer.

Meanwhile the PbS nanocrystals were made in a relatively simple Schlenk line, before being spin-coated layer-by-layer onto a plastic resist.

They believe that the approach is compatible with the high-volume silicon CMOS manufacturing process, as well as emerging flexible electronic platforms.

• Other members of Konstantatos’ ICFO research group claim to have made progress with a novel material suitable for thin-film solar cell designs that does not rely on any rare or heavy-metal elements like indium or cadmium.

Their silver bismuth sulfide (AgBiS2) nanocrystals, made using cheap and simple solution processing at a relatively low temperature (less than 100 °C), showed a power conversion efficiency of 6.3 per cent – although Konstantatos says that the team is now working on devices that are expected to be twice as efficient.

“This is the first efficient inorganic nanocrystal solid-state solar cell material that simultaneously meets demands for non-toxicity, abundance and low-temperature solution processing,” he added. “These first results are very encouraging, yet this is still the beginning and we are currently working on our next milestone towards efficiencies [above] 12 per cent.”

The solar cell work was funded under the European Commission’s Seventh Framework Programme (FP7) research and development effort, under a €3.5 million project called “Nanomatcell” that ran for three years until the end of 2015.

The results have just been published in the journal Nature Photonics.